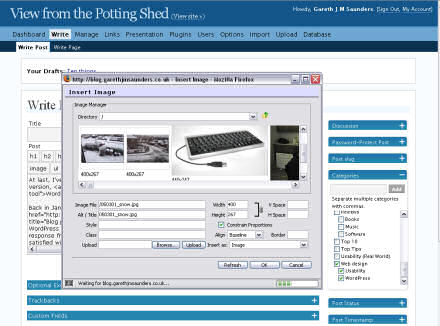 Screenshot of ImageManager 2.0 plugin for WordPress 2

At last, I’ve gone and done it. I’ve finally upgraded my blog from WordPress 1.5.2 to the latest version, WordPress 2.0.2.

Back in January I tested out the then newly released WordPress 2.0 and decided that I’d hold back on my upgrade until I found a suitable response from the WordPress community over how version 2.x handled image uploads. I wasn’t satisfied with the abolition of the Upload option, since I switch off the WYSIWYG post editor, in favour of inserting my own XHTML codes.

The upgrade went without hitch. The WordPress Codex has a good article to keep you right on how to upgrade from one version to another.

Today I discovered this plugin ImageManager 2.0 that changed all of that for me. And before you could say “database backup” I had backed up my blog and moved up three upgrades in one giant leap.

Here’s what the author has to say about ImageManager 2.0:

The ImageManager plugin integrates the stand alone PHP ImageManager + Editor with WordPress. The ImageManager provides an interface for browsing and uploading image files on/to your server. The Editor allows for some basic image manipulations such as, cropping, rotation, flip, and scaling.

And it does exactly what it says, however I have a few initial gripes with it. Because I have nearly 500 images in my uploads folder whenever I upload an image it took absolutely ages to refresh as it reads all 500 files to create thumbnails of each. Also for some reason the edit and delete buttons aren’t showing beneath images (I discovered that this had to be set in RoleManager). Also the image filenames aren’t listed and there appears to be no way to sort the images other than by its default sort order (whatever that is).

Still, it’s a vast improvement on the built-in image upload. Some more tinkering under the bonnet to be done methinks.

Another WordPress plugin I found today was Role Manager.

The Role Manager allows you to alter the capabilities of your WordPress roles, delete unused roles, and add new roles.

I’ve not explored this plugin thoroughly, but it could come in very handy for some larger projects that I’m using WordPress to manage.