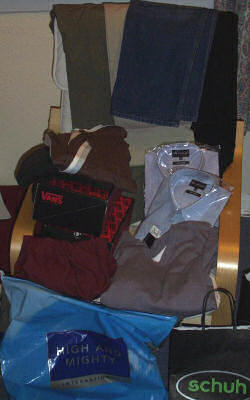 I’m disappointed that it wasn’t more widely advertised; Jane and I seemed to be the only ones taking part.

We started the day in Gap and bought a pair of smart trousers. The shop assistant there was wonderfully enthusiastic and helpful. We gave him a score of 9/10 for helpfulness and chattiness.

Then as we were shopping in alphabetical order we moved on to High and Mighty where I got a couple of pairs of trousers, one of which Jane has had to take up. The first pair of trousers I’ve had which have had to be shortened since I was about eight! It was refreshing being in a store where I was considered small. The shop assistant scored 15/10 for his chattiness, and if I say that he was very enthusiastic I’ll leave it at that.

Levi’s were next. And then Next. I was gutted. For the first time in about twenty years, if not more, I couldn’t get a pair of Levi’s jeans that fitted me. Their new loose range (509) are not as loose as their old loose range (508), or the loose range before that (618). It must be the eight. So, I had to get jeans in Next. I’ll need to hunt the Internet for a pair of 508s (size 36/34 in case you were wondering).

Following lunch we found a couple of pairs of Vans shoes at Schuh before heading to the Gyle shopping centre for more shopping goodness at Marks & Spencer and Burtons.

All in all it was a good day. I was really flagging, energy-wise by the end of the day, but we’d bought some nice clothes and helped to build my confidence a little in terms of clothes shopping. I’d got it into my head that there wasn’t much out there that would fit me in the big names high street stores, and my self-confidence has been knocked quite a bit during the last few years while shopping that I was quite nervous going into stores, to be honest.

I was glad that Jane was with me to support me and suggest things that I could try. She tried all day to introduce something called “colour” into my wardrobe. During the last seven years or so most of my clothing buys have been at the black end of the colour spectrum. I’ve bought things thinking “Now, will this go with my clerical shirt and dog collar?” My wardrobe is now slowly changing from black and white to colour.

At least, Jane’s mission to introduce colour into my wardrobe was going well until in M&S I exclaimed, “Oh! I like that jumper!”

“What’s wrong with that?” I asked.

We’ve ordered the khaki one online instead.

Anyway, on the whole I did manage to find nice clothes, in my size in these top names high street stores. Admittedly I had to look for them, and I discovered that just because a t-shirt or jumper says XXL it doesn’t mean that it will be long enough for my body, and just because two, almost identical, pairs of trousers say 38″ waist it doesn’t mean to say that my massive thighs will fit into them.

I seem to be at the upper size range of Gap, Next and Burtons, and at the lower end of High and Mighty, and there doesn’t seem to be that much in-between apart from good old M&S.

It’s been a good day. But it’s not over yet: I still have a new suit to buy. And matching shoes.