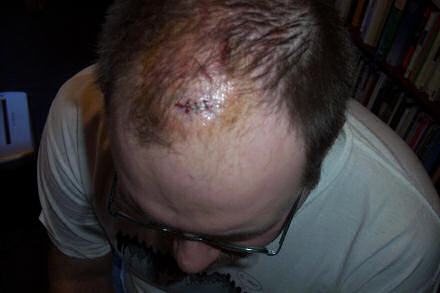 A photograph of the top of my (balding) head showing a few post-op stitches, kindly taken by the lovely Jane.

Today has been a day of medical adventures, for Owen and for me.

First, we’re delighted to report that our nephew Owen was discharged from hospital this afternoon and is now safely back home. Jane, on her lunch-hour, went to see Owen, Eddie and Rebecca at the Sick Kids at and reported that Owen was looking much better then, and they were hoping that he’d get out tomorrow. Isn’t God good.

Secondly, my head. On 10 January I reported on my blog that I had a sebaceous cyst on the top of my head, and given that my hair is now receding it was looking more obvious. I had it checked out with my GP who referred me to their Cutting People’s Heads Open™ specialist.

I suspected that the doctor would look at it and refer me to St John’s Hospital, Livingston, which is what my GP said might happen. But she didn’t. No! She just operated there and then. Needle in … and then, well, I can’t tell you what happened because a) I was numb, and b) it was on top of my head and I couldn’t see that from where I was sitting. The cyst is being sent to pathology to make sure that it wasn’t malicious, or anything.

I do know, however, that I have to take things easy for 48 hours and not wash my hair. Which will be horrible, because I don’t really feel that I’m clean until my hair is washed. (I wonder if the New Testament has anything to say about that.)

So now, I have a lumpless head. But by Jiminie it doesn’t half hurt now! Even after a couple of paracetamol.