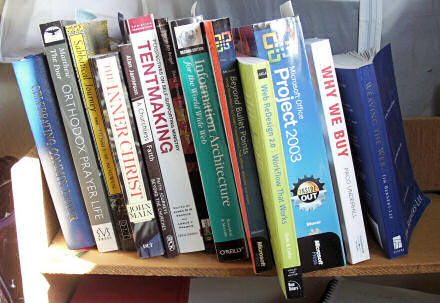 Photograph of my “Currently Reading” bookshelf.

In my study I have a bookshelf dedicated to what I’m currently reading, or what’s up next. One of my problems is that I tend to have numerous books on the go at the same time. Some books are things that I’m referencing only a couple of chapters from, or are books that I keep coming back to; others I start because I need the background on something quickly; while still others I want to read just for the pleasure of it. At the moment I’m focusing on simply finishing a couple of books before I get started on any others.

You may be able to make out from the photograph that there are thirteen books there, currently. A mixture of Christian prayer, spirituality and mission interspersed with books about Information Technology.

Here’s a quick jaunt through the books there just now, from left to right:

… and I daren’t even list the books sitting on my To Read After My Currently Reading Shelf Has Been Cleared shelf! 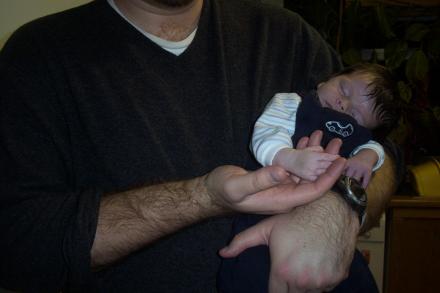 Dear lovely praying people of the internet, please could I ask you to pray once again for my brother’s son Owen, as well as Rebecca and Eddie.

Last night we got a telephone call from my Mum to say that Owen was rushed into the Sick Kids hospital by ambulance having had breathing troubles after which he turned very pale and then blue.

We got praying straight away and began texting other friends and members of the family to get them praying too. Mum kept us up-to-date with goings on.

At about 03:00 am Jane woke with a start as a text message came in from Eddie to say that Owen had bronchiolitis caused by a Respiratory Syncytial Virus (RSV), that he was on oxygen and lots of TLC and would probably remain in hospital for a few days yet.

I looked up RSV on the internet, when I realised that it didn’t mean Revised Standard Version. Here’s what a US site called Centers for Disease Control and Prevention says:

Respiratory syncytial virus (RSV) is the most common cause of bronchiolitis and pneumonia among infants and children under 1 year of age. Illness begins most frequently with fever, runny nose, cough, and sometimes wheezing. During their first RSV infection, between 25% and 40% of infants and young children have signs or symptoms of bronchiolitis or pneumonia, and 0.5% to 2% require hospitalization. Most children recover from illness in 8 to 15 days. The majority of children hospitalized for RSV infection are under 6 months of age.

All of which makes sense. Owen has had a cold for a couple of days, which he seemed to be fighting quite well, but bless him it obviously got too much for him. He’s in the best place just now and we’ll keep praying for him and his lovely parents Rebecca and Eddie.