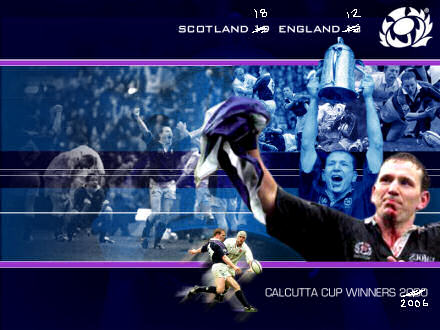 If I just make a few changes I’m sure no-one will notice.

Did you see it? Did you?! What do you mean “what?”?! I mean Scotland trouncing England at Murrayfield! If you missed it you can read the match report at the Official Website of the RBS 6 Nations.

I’ve not watched a Scottish game where Scotland played with such passion and gutted determination for years, and where I was leaping up from my seat every few minutes shouting at the TV. “Come on…! It’s not a quiz…! Drop him …! Yes …!!”

They are beginning to consistently get things right, they are getting the basics of play right, they are making tackles, catching and passing well, and are putting the ball between the posts when called to. I’ve been saying for years that if they can’t get to the line then they need to go for a drop-goal to get points on the board. At last, they are doing it.

It was such a delight to see Frank Hadden smiling from ear to ear. That man is a Scottish hero. He’s obviously getting something right. And more to come, I hope.

We watched the game at Potting Shed HQ with Eddie and Rebecca (and Owen), Camella, and Valleyboy Rich. As the final whistle blew Jane and I leapt out of our chairs — well, Jane did as I was already standing — and hugged each other, “Happy New Era,” I said. And I believe that it is.