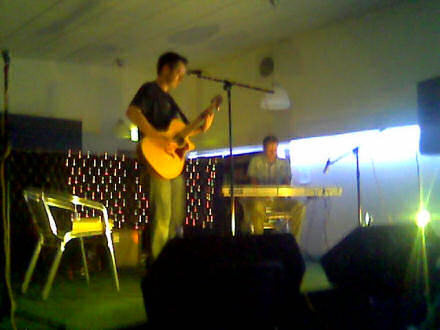 Calamateur in concert, Andrew on acoustic guitar and Mark at keyboards.

This evening Valleyboy Rich, the lovely Jane and I popped over to The Vine Church, Dunfermline to see our long-time Inverness-based friend Andrew Howie’s band Calamateur gig at the Vine CafÃ©.

The venue was contemporary, and not at all church-like, which suited the gig perfectly. Punters were seated around polished chrome tables drinking hot chocolate and eating fudge doughnuts, the lighting was dimmed, with candles placed strategically to enhance the mood. At the front, to the left of the stage, a huge back-projected screen showed cityscape images, similar to those produced by One Small Barking Dog.

Calamateur this evening consisted of Andrew Howie on acoustic guitar and vocals, with the odd finger used to press play on what I presumed was some kind of MIDI system that produced backing percussion and various other sounds; Mark Someone was on keyboards, providing a beautiful accompaniment to Andrew’s delicate guitar and haunting vocals.

Believe it or not, despite having known Andrew for about five years or so, this was the first time I’d seen him playing live and one of only a handful of times that I’ve seen him with a guitar in his hand! They played for about 35 – 40 minutes, which was over all too quick.

The set was a combination of quiet, delicate songs about hope, interspersed with darker, heavier material about betrayal, revenge and eventually murder! My only criticism was that the sound could have been better, there was a poor balance between instruments and the EQ levels didn’t sound right — it all sounded a bit lo-fi from where we were sitting. I’m not entirely sure whether this was down to our location near the front or the folks on the mixing desk.

But at the end of the day it didn’t detract from our enjoyment of the gig. Andrew rocked, his performance was solid, and the songs and lyrics quite, quite beautiful.

John Peel played him on his late night BBC show, back in the day, you know. And that man was rarely wrong about a good tune!

One thought on “Calamateur gig in Dunfermline”