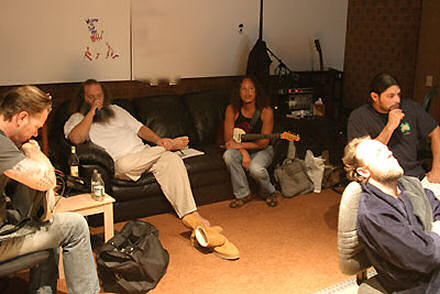 Metallica in the studio with Rick Rubin, February 2006. (Photo from Metallica.com.)

After a few weeks with some intense posts about babies, fertility, jobs and the like I’m relaxing with a few self-indulgent posts about my interests … and this evening I just discovered (about a week later than posted) that Def Jam / Def American / American Recordings supremo Rick Rubin is producing the next Metallica album; they are in the studio right now.

Rubin has been responsible as Producer and Executive Producer on some of my favourite albums by the likes of Slayer, Danzig, Red Hot Chili Peppers, System of a Down, and Audioslave.

It’s a good move by Metallica, in my view. Since the incredible “black album” in 1992 Metallica have been using producer Bob Rock (until then most famous for producing the likes of The Cult and Bon Jovi). Bob was great, I’ve no doubt about that. The sound on “the black album” was so much warmer and balanced than their previous albums. It was that combination of solid writing, playing, and production that catapulted Metallica into the consciousness of the world’s record-buying public.

But a lot of fans have become impatient with Bob Rock, as this petition demonstrates, believing that Rock was largely responsible for their albums becoming increasingly less heavy, and more loose and blues-based. I’m not entirely sure that it was all his doing. The partnership of James Hetfield and Lars Ulrich has always been pretty solid and closed when it comes to writing and arranging material.

As I’ve said before on this blog, I loved their Some Kind of Monster film.

It was vulnerable, honest and raw. It was like an awakening, seeing beyond the trappings of the rock n’ roll lifestyle and realising that what was most important was their health, their relationships, their humanness. Rediscovering who they were as individual human beings was essential before they could rediscover who they were as a band, as Metallica.

That honesty and openness has obviously extended into conversations about the production of the next album. I have no doubts that Bob Rock will still be close friends with the members of Metallica — they’ve gone through so much together: good and bad, creative and destructive. But I’m delighted that they’ve taken another risk and opted to work with another producer.

Rubin will bring something new to the party; something wild, something raw, something powerful. I wonder when we look back in another 14 years time whether we’ll see St Anger as being a transitional album as Metallica’s sound and attitude go back underground, back to their roots. Reduced by Rick Rubin.

I, for one, am looking forward to hearing what they do next.