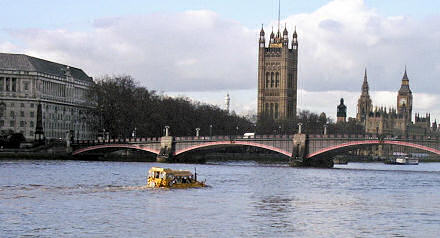 While we were walking along the Thames the other day we were more than a little surprised (and amused) to witness a boat with wheels driving down a slipway into the river, just southeast of the MI6 building.

The amphibious vehicle was from the London Ducktours company, which waddles its way around London, through the streets and on the river; we were passed by one at Trafalgar Square later on.

It amused us as we walked along the riverside, as we were able to walk at about the same pace that it was travelling up the Thames. And not least because it was sitting very low in the water: 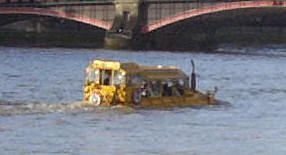 Is this a boat just sitting very low in the water, or is it sinking? Come to think of it, is it a boat on a river or a minibus on a very flooded street?

We didn’t go on one, but it did look like quite an ingenious way to see London from both the street and river levels.

One thought on “What the duck is that?!”