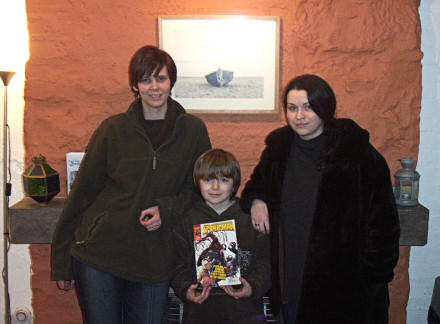 Jane, Benjamin and Jenni standing in front of the fireplace in our house in Cellardyke.

Yesterday my sister Jenni and her son Benjamin travelled up from Selkirk, and visited our house in Cellardyke for the first time. I can hardly believe that given we’ve had the house for over 15 months now Jenni and Benjamin had never seen it!

It was the final day of Benjamin’s mid-term break and we wanted to help make it a bit special for him. So having had a meeting in town at 09:00 I hung around and met them off the bus at St Andrew’s Square.

It was a fairly productive ‘hanging around’ though: I bought a new hat at Millets, and had this exchange with a shop assistant there:

Me: I’ve got a new hobby: losing hats. I’ve lost two in the last few months.

Shop assistant: Well, at least you’re approaching your new hobby with a certain degree of enthusiasm.

Jenni had also asked me to check out the WH Smith (newsagent) at Waverley as she’d had a tip-off (from Forbidden Planet) that I might find the latest collector’s edition Marvel Spiderman comic (#135) there, which Benjamin was looking for. It wasn’t. But (a) I did bump into a friend, Suz, outside Waverley, which was cool; and (b) I found the comic at the WH Smith at St Andrew’s Square Bus Station, just as Jenni and Benjamin arrived.

Meeting up with Jane at home — who was sporting a new, shorter and coloured hair style (see photo above) — we sped off to Cellardyke. After a spot of lunch, Jane, Jenni and Benjamin set about putting the house to rights in preparation for guests from Interhome this coming weekend. Meanwhile, I put together a CSV file of all the Scottish Episcopal Church saints’ days and festivals for merging into MS Outlook. Which will be my next post, when I return from the 11:00 am Eucharist this morning.