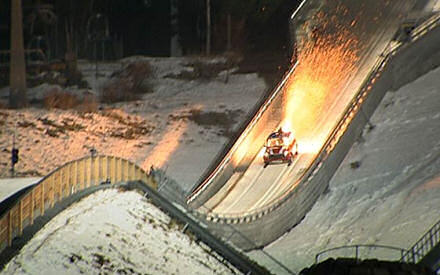 I wouldn’t imagine that you’d be granted membership of the Self-Preservation Society in one of these!

Here’s a scene you don’t see very often: it’s of a rocket-powered mini thundering down a ski jump at Lillehammer in Norway, as featured on BBC’s Top Gear programme the other night.

Top Gear is one of my all-time favourite television programmes. Of all time. Ever. It is consistently interesting and very, very funny. I’ve listened to enough rants from people about how self-righteous and pompous Jeremy Clarkson is, and I can’t agree. I suspect that many people can’t see beyond his larger-than-life character to appreciate just what a first rate journalist he is.

His book The World According to Clarkson is packed with beautifully crafted, and hilarious articles that he wrote for his regular column in The Sunday Times. Quite inspirational too, some of them.

Anyway, Jane and I sat on the sofa watching the Top Gear Winter Olympics the other night with tears rolling down our faces. From laughter, you understand. If you get the chance to see it again on a late-night repeat (BBC 2 Scotland is showing it again on 18 February at 22:15) then do, I promise that you’ll enjoy a great hour of fine photography, cutting-edge experiments with cars and ice (!!) and some of the funniest banter this side of Father Ted or Black Books.