Today’s tasks, however, included a visit to the dentist at 10:00 am, which I survived with nothing more than a follow-up appointment to have a clean and polish. (I presume she meant my teeth and not my rapidly balding head!) As I said to a friend on MSN Messenger this morning, it’s always nice to start the day with a pretty, blonde girl sticking her rubber-gloved hands into my mouth … puts me in mind of my stag night! (That was a joke, by the way.)

It’s also been a good day for people showing me things online. 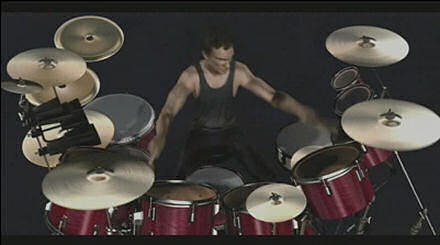 Screenshot from YYZ, a fan animation of Neil Peart drumming to Rush’s YYZ.
The most impressive has to be the YYZ animation on Rush drummer Neil Peart‘s website. (Screenshot above.) Created by a Rush fan using 3D Studio Max R3, Adobe Photoshop CS and Adobe Premiere Pro it is incredibly impressive. The animated drummer even looks like (a young) Neil Peart himself!

A little bit of trivia: the opening drum riff spells out YYZ (which is the code for Toronto International Airport, which is Rush’s hometown in Canada) in international morse code: -.– -.– –..

Next up is the exciting news that Web-guru Jeffrey Zeldman has updated his truly inspiring book Designing with Web Standards (Second Edition) (New Riders, 28 February 2006).

I took his first edition away on holiday with me to Tenerife a couple of years ago, and it was just brilliant. I’d known for quite a while that Web standards were clearly the way forward, but I’d not read anything quite so evangelistic about it until I read Zeldman. He put it so simply, in such an easy-to-read way that there was no arguing with what he was advocating.

That this volume has now been updated is great. Let’s take Web standards to the next level. Tell everyone you know about this book: there’s still a long way to go. (Which I’ve written on the same day that the Microsoft Website wouldn’t allow me to download Microsoft Live Messenger 8.0 Beta with Mozilla Firefox, only Internet Explorer! Very poor show, indeed.)

Great news! The world’s greatest video game, LEGO Star Wars which follows Episodes I, II and III, is to have a sequel that follows the action through the original trilogy of films, Episodes IV, V and VI (Star Wars: A New Hope, The Empire Strikes Back and The Return of the Jedi, respectively).

As I’ve said before I loved LEGO as a child, I loved computers, and I loved Star Wars. Mix the three together with a fine helping of humour and you can’t possibly fail with this game. That we will be able to play our way through R2-D2 and C-3PO’s escape to Tatooine, the snow battle on Hoth, and Jabba’s Palace in computerized LEGO is really quite exciting. I can’t wait! 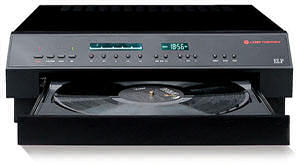 Last up is something I spotted on Digg today: a Laser Turntable. That’s right: a gramophone player that uses a laser instead of a traditional diamond stylus.

The good news is that it apparently sounds amazing, and doesn’t damage your LPs the way that scratching a small lump of carbon across it does. The bad news is that the cheapest version costs over £8,600.