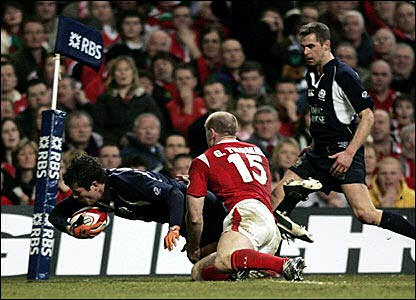 Scotland scoring the first of their second last-minute tries against Wales , to lose 28 – 18. (Photo: BBC Sport)

This weekend we had our good (Welsh) friend Rich Olyott staying with us in sunny Edinburgh. I enjoy weekends with Rich, because they are relaxed and fun events … except maybe while there’s a Six Nations match between Scotland and Wales!

So, first of all, the sending off of Scott Murray (Scotland No. 5) for his quite instinctive kick-back after being caught in a very late tackle. I walked out of the living room I was so cross with the referree. (I also needed a pee!)

During my mid-match hiatus another friend, Iain, telephoned from Inverness to find out how things were going generally and to recommend a book that appears to be doing the rounds just now: The Shaping of Things to Come: Innovation and Mission for the 21st Century Church by Michael Frost and Alan Hirsch (Hendrickson Publishers Inc., 2003).

In The Shaping of Things to Come the Australians Frost and Hirsch present an innovative vision of how the church can be more relevant and responsive to the spiritual hunger seen in the Western world.
(From Hendrickson’s website.)

In searching the Web for more information about the book I came across an interesting review by Eddie Arthur. Here’s something that he writes that got me quite excited:

Frost and Hirsch say that traditional churches create sacred spaces that are fundamentally uncomfortable for not-yet-christians. Then they set about drawing the not-yet-Christians into those spaces. They say that in the attractional church “evangelism becomes about inviting people to meetings” — and this limits our vision for what God can do both in time and in space. But “Jesus didn’t say, sit in your church and wait for people to come to you.”

Even when traditional churches set out to be evangelistic, Frost and Hirsch suggest that church planting generally involves planting Sunday services rather than real Christian communities.

The Missional church, on the other hand “does not seek to attract people to it. It seeps into the cracks and crevices of a society in order to be Christ to those who don’t know him yet.” It does this through proximity spaces, shared projects, and commercial enterprises. Proximity spaces are “places or events where Christians and not-yet-Christians can interact meaningfully with each other.”

They are definitely not churches. Examples of proximity spaces include art workshops, pubs and cafes where Christians form part of the regular clientele. Shared projects are activities of genuine interest to the wider community, which meet a need and provide an opportunity for Christians and not-yet-Christians to meet in a natural situation. Commercial enterprises are real businesses, run by Christians for the wider community, but which are not overtly evangelistic. Examples included a shoe shop in San Francisco and a pub in Barnsley. The point of all of these activities is to find neutral ground where the Church can intentionally meet with the wider world.

This does not mean that the Church merely becomes a social club. Bible teaching and worship are still very much part of the life of the church (though perhaps not done in traditional ways), as is mutual commitment and accountability.

Now that’s what I’m talking about! The more I think and read and pray about it, I firmly believe that we need to get ‘out there’ again and live and worship amongst the general population.

From another review of the book:

This book is a “must-read” for anyone that is serious about advancing the Gospel in the 21st century. The basic thesis of the authors, an Australian and a South African who are planting churches in Australia, is that Christendom is rapidly dying in the Western world. By “Christendom”, they mean the dominance of the church in Western culture from the fourth century, when Constantine proclaimed Christianity the religion of the Roman Empire, until recently. The characteristics of Christendom include:

That is, the church expects not-yet-Christians to come to us, and when they do, we extract them from their social networks…

The authors argue, therefore, that what is needed is a missional church, as opposed to a “parish” church which assumes that “If you build it, they will come.” By “missional”, they mean a church that is incarnational, messianic, and apostolic. These are three terms that are open to misinterpretation, and the bulk of the book is devoted to expounding on these three themes.
(From review by “John Ed Robertson, Lausanne Conference, 2004” at Hendrickson website.)

I returned to the match after Iain had called in time to see Scotland scoring a couple of wonderful tries. “Come on Scotland,” Jane and I were yelling at the TV. “We don’t mind if you lose, but if you could just score a try that would make us happy.”

And they did. Twice, the second coming from a tremendous interception by Chris Paterson.

From what I saw of the match overall I was encouraged by Scotland’s performance. The shape of things to come, perhaps?

When Rich left, to drive back to Glasgow, I returned to my desk to discover that he’d added to my jotter. On it I had scribbled down the name of the book when Iain had given it to me over the telephone. It now reads, thanks to Rich:

I’m not sure world domination, in the traditional, military sense, comes under the remit of Christian mission, but tea certainly sounds good. 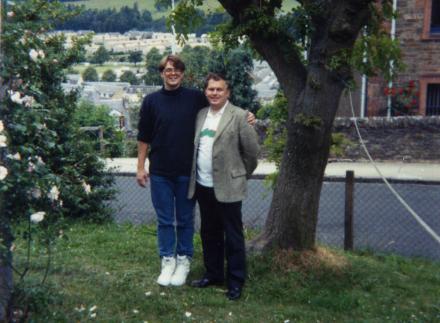 Today would have been my Dad’s sixty-first birthday.

The photo shows me standing beneath my tree in our garden in Selkirk. The three of us (me, Jenni and Eddie) each had our own trees in the garden; that one was mine. That photo must have been taken around 1991, judging by the dodgy haircut, black polo neck jumper, giant (darkened) glasses and white basketball trainers. What on earth was I thinking?!

Anyway, it was one of the few good photographs that I have of Dad and me; and shows just how much taller I was than him! I still wish that he was with us — sixty-one wouldn’t have been that old; fifty-two certainly wasn’t.