Last night at the Powerpoint band rehearsal I discovered why my guitar hums more on stage than it does when I’m playing it at home.

It’s been quite annoying these last few months. When I’m playing, it’s not too bad because I can’t hear the hum and buzz because of the volume, but as soon as I stop playing it sounds as though I’m in the middle of a lightsaber duel!

Well, last night I discovered for sure what the problem was. And it wasn’t my cables, which is what I’d previously thought. I tried three different cables (one own-brand from SoundControl, two Whirlwinds — which are my cables of choice) and it didn’t make one iota of a difference: I still buzzed.

Until the stage lights went off.

Where I am standing on stage is next to a wall, behind which is a huge electrical something that powers the stage lighting. When the lights went off my non-playing sound was remarkably quiet. I mentioned this to Richard, our extraordinary sound desk guy, and said that I was going to build a giant wall of ton foil. “That’s no make any difference,” he said, “you need a noise gate.” A noise gate! Fantastic! Now I know.

I also knew that my Vox AD50VT amp has a built-in noise gate, but embarrasingly at the time I didn’t know how to activate it, because it’s still quite new. (I’ve since read reviews at Harmony Central that don’t really rate the built-in noise gate.

The <a href=”http://www.harmony-central.com/Effects/Data/Boss/NS_2_Noise_Suppressor-1.html” title=”BOSS NS-2 reviews at Harmony Central>reviews for the BOSS NS-2 Noise Suppressor, however, are glowing. But can I find one for sale in Edinburgh? 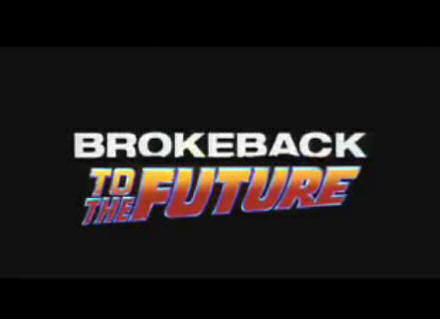 This is a very well made reworking of the film trailer for Brokeback Mountain using clips from the Back to the Future series of films.

The touching story of a love that could never be.

Of course, it helps if you know the story of Brokeback Mountain before you watch it.