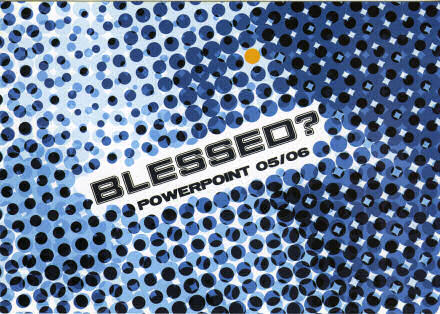 Another month, another Powerpoint. I’m just back from our pre-Powerpoint setup, soundcheck and rehearsal … and my ears are ringing. But then what else should I expect when I’m standing next to the percussion powerhouse that is Mr Andrew Weir.

I’ve really enjoyed the Powerpoint band this year. This is, I think, my fifth year being involved — with a three years hiatus somewhere between 1999 and 2003. Andy led during my first two years, I was on bass; now Andy is drumming and I’m playing lead guitar. We’re playing a kind of musical chairs. Literally.

While I’ve enjoyed it in years past, this band is different. It’s the first time that we’ve had a solid, stable, and committed line-up since the 1998-99 band (which was Brian Allan on lead drums, me on lead bass, Rik Brown on lead guitar, Andrew Weir on lead vocals and lead acoustic guitar). This year we’re a five piece: Andrew Weir on drums and backing vocals, Mike Arthur on bass, Tim Cocking on keyboards, me on lead guitar, Neil Costley (with an ‘e’) on lead vocals and acoustic guitar. Actually, we also have a sixth member without whom we wouldn’t sound quite as … well, LOUD: Richard Mitchell on mixing desk, microphone placement and bass amp repairs.

We’ve really gelled as a group. There is a commitment to the band, there is a real commitment to worshipping Jesus and putting that before anything else. I can’t speak for the other four but there is something about playing my guitar that makes my whole being want to worship God. When I’m playing I don’t tend to sing the words, as I’m too busy concentrating on what I’m playing, too busy listening to what the others are playing, and weaving in my sounds with theirs.

We often tend to think of worship as being something that is said, something that is vocalised, something that is intellectualised. When I’m helping to lead worship with my guitar worship is something that I feel. In my playing I offer my whole self to God: mind, body and emotion. The word “worship” comes from a root meaning “to give worth” — it is worth-ship. And I praise God that he has given me the ability to play music, and blessed me with a guitarsenal of wonderful equipment (most of which need restringed before the event tomorrow evening!). 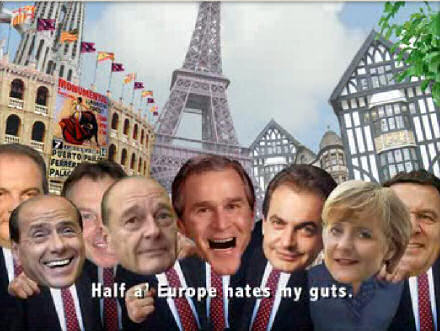 The site also has a link to Engrish which is rather amusing. I especially like the odd computer error messages. But then I would, wouldn’t I.

Also, I own this Echo Mic (also see this image) It is just genius, whatever it all means!

Pa Pap,
Ma Ma,
I and Lady
employees
to play
with it
together!

What can that possibly mean?! On another side of the box it reads:

The exercise of sing songs,
The Toast Master in the party,
Ha! Ha! Ha! The Drama sepeech
On the stage as real
As possible.

Wise words. That’s had me laughing since my friend Ian Rankine (not that one!) bought me it as a present while I was sharing a flat with him in St Andrews, in the early 90s. 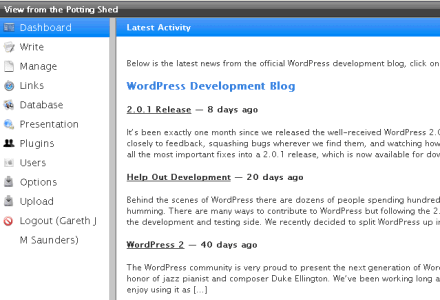 Here’s quite a cool plugin for WordPress: WP Tiger Administration.

For those who don’t know, in WordPress — which is the blogging tool/content management system that runs this blog (and thousands of others) — plugins are files that you add extra functionality to the WordPress application. It’s a plugin that allows me to list my last-played tracks from Last.fm/Audioscrobbler, for example.

Well, WP Tiger Administration is another plugin, but this one works entirely behind the scenes, altering the look and feel of the Admin panel. And because it’s a plugin it doesn’t affect any of the core code for WordPress and therefore acts simply like a theme for the WordPress admin. As the name might suggest (to some) it gives it a very attractive and usable Mac OS Tiger feel, presenting the main menu items down the left-hand side, with submenu items along the top of the screen.

(Incidentally, Sri Lankan for “Easy Tiger” is “Ho Kotiya” (pronounced “HAW KAW-tee-ya“) — just thought you’d like to know. I learned that on my ministry selection conference in 1996.)