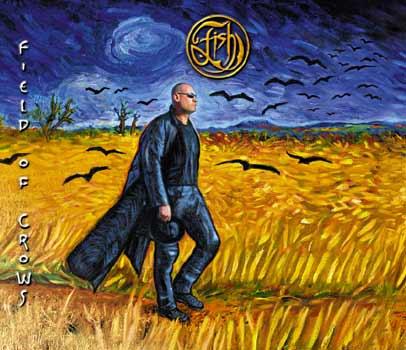 The album cover for Fish’s latest album, Field of Crows.

I’d just like to take this opportunity to make a public apology to Fish. Sorry for accosting you in Borders book store this evening. I was the one who approached you quite boldly exclaiming “Mister Fish!” while you were trying to pay for whatever-it-was you were buying.

What an amazing week I’ve had so far, and it just gets better and better. First I get a job, then we find somewhere to live, then Scotland beats England 18-12 at Murrayfield, and then I see one of my all-time musical heroes standing in the queue in front of me at my local Borders book store. I couldn’t possibly not say hello.

“Mister Fish!” I exclaim offering my hand to shake his.

Fish (real name Derek W. Dick) turns and looks at me, with an expression of “Should I know you?” written across his face, while taking my hand and shaking it.

And that was it. That was my encounter with the mighty Fish.

You know, I don’t really go in for the whole celebrity game — people are people, as Depeche Mode once sang — and I count among my friends a handfull of people that you might class as famous. I don’t get awestruck by the supposed wonder of ‘celebrity’; just because someone is on telly, or radio, or has written a book, or an album doesn’t make them a demi-god in my book.

That said, there are some people that I truly admire for their talent, their longevity, their inspiration. Fish is one of those people that I admire. I love his music, his lyrics and his concerts are legendary. My favourite review appears on his website front page:

“…being at one of his gigs is like being entertained by a boisterous host at a particularly loud private party.”
(Graeme Smith, S1play)

And then there is his sheer determination, struggling through the collapse of parts of his business and his relationships, and his vulnerability and honesty in sharing some of what he’s gone through in the lyrics of his songs. I’ve personally found him quite inspiring, helping me through numerous dark days and fellini nights.

I could hardly sign the receipt slip for my book (I’ve still not got a Chip and Pin card) I was still shaking. The last person that I saw that made me shake because I was so excited to see them was Doddie Weir, the former Scotland No. 8 (and legend!).

Anyway, my name is on the official Fish website. Fish used to work on the Bowhill Estate, near my home town of Selkirk. In June 2003 the Selkirk Weekend Advertiser ran an article about Fish’s connection with that area of the country, which I scanned and submitted to the Fish website. There is now a copy of that article along with a kind thanks to me on Fish’s biography page.

Back to the apology: Fish, sorry for randomly accosting you at the checkout but please know that you made my day. 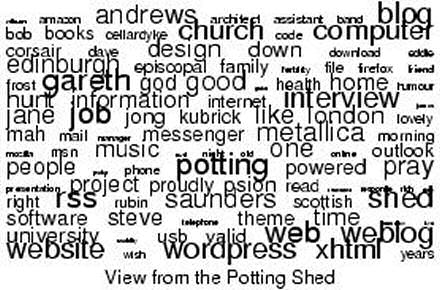 The most used words on my blog, arranged into a “word cloud”.

Spotted on GadgetVicar‘s blog. From Snap Shirts: you can instruct their box of computer magic to trawl your blog and it will produce an image showing a word cloud of the most often used words on your webblog; the more a word is used the larger it appears in the cloud.

This image is then printed for you on a t-shirt of your choosing. You can then wear your blog with pride. I’m quite tempted, to be honest. (Hmm… temptation and pride, just before Lent. Not looking good!) 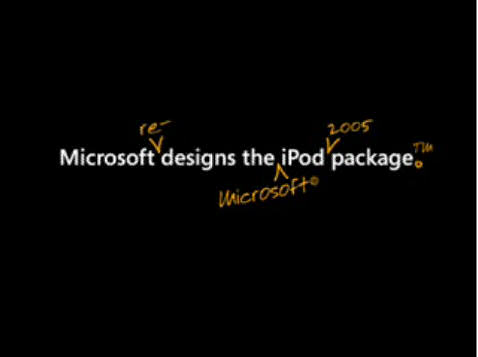 My friend James pointed me to this earlier today. It’s a short film parody on You Tube showing what the Apple iPod packaging might have looked like had Microsoft been responsible for it.

Geeky question: if anyone can tell me what fonts are used in it, I’d be very grateful. Particularly the handwriting-style font. 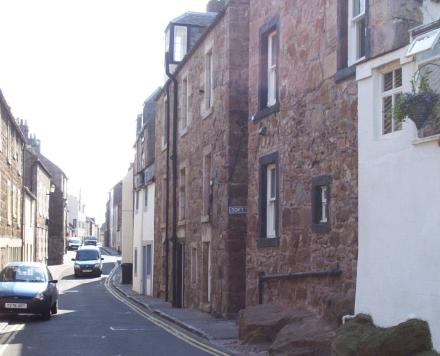