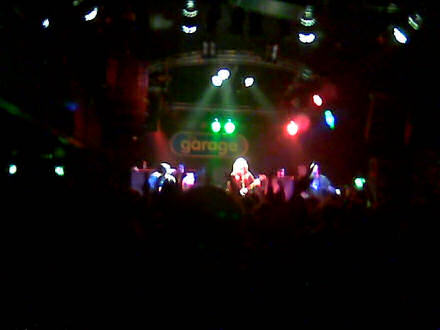 Soulfly live in concert at Glasgow Garage this evening.

Soulfly rocked in Glasgow this evening, at the Garage; although they really deserved a much larger venue and a larger stage.

The support band Skindred were surprisingly good. Their guitarist was the spitting image of Danny Wallace; at least from a distance. I sent him a text to tell him that. Danny, I mean, not the guitarist. Their vocalist was like a squashed version of Derrick Green from the mighty Sepultura. Not quite as tall, more stocky, but no less presence. He quickly won over the whole crowd and had us all bouncing to their unique brand of Ragga Punk Metal. Besides vocals Welsh frontman Benji ‘played’ samples on a small Casio keyboard, and ended their set with a most beautiful rendition of the built-in Casio keyboard demo. Great humour, great music and great presence. Look out for Skindred in the future.

I remember years and years ago in my bedroom in Selkirk listening to the album Beneath The Remains by then little-known Brazilian band called Sepultura. Their frontman and rhythm guitarist was a man called Max Cavalera. The man is a legend, rising out of Belo Horizonte to become, at one time, one of Brasil’s largest exports after coffee and drugs!

Tonight I was in the same room as Max Cavalera — who was sporting a Scotland FA shirt — watching him with his current band Soulfly ripping through a “best of. . .” of Soulfly and Sepultura tracks, such as Babylon, Eye For An Eye, Prophecy, L.O.T.M. (Last of the Mohicans), Refuse/Resist and Troops of Doom. The art of shredding is not dead! Thrash metal is not dead!

The only problem about seeing a thrash metal band in concert is that they can get through 15 – 20 songs in only 75 minutes. Which is just what they did. And SHOCK! no encore! First headlining band I’ve ever seen not to come on again for at least one more song.

But it didn’t detract from a great evening of REAL METAL™.