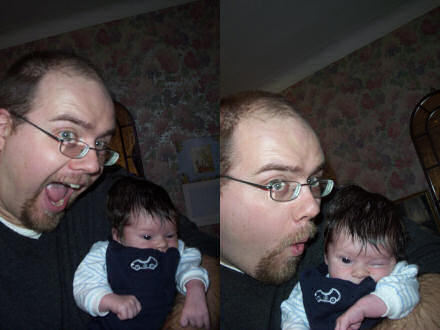 Self-portrait of Gareth with Owen. Twice.

Yesterday I travelled down to Selkirk for my Mum’s cousin Jasmine’s 75th birthday. It was a great family event, attended by a great family. I do love our family get-togethers: there is usually a lot of laughter.

As a surprise my brother Eddie and his wife Rebecca and son Owen came down just in time for birthday cake! It was lovely (that they came down, I mean, although the cake was okay too) as it was the first time that most of the family had seen Owen. Which is fair enough, as he was only two weeks old yesterday. Wow! a fourteen day old human being!

After the party, back at Mum’s, I “got a hold” which is where I took the self-portrait photos above — since no one else was taking a photo of us!

And then I managed to send him to sleep (below) singing made-up-lyrics to a tune from the film Shrek: 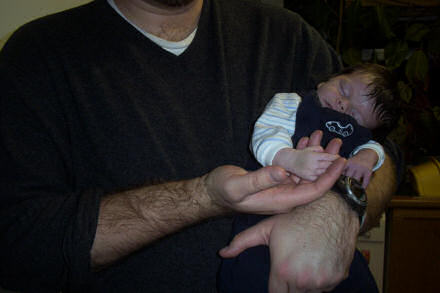 Look how tiny his hands look compared with mine. (Photo by my sister Jenni.)

It was a game that we’d come up with on Thursday night when Jane and I visited Eddie and Rebecca, and where Jane cooked them dinner. As soon as I had finished dessert Eddie handed me Owen so that he could tuck in with more than just one hand.

Standing in the middle of the kitchen, gently bouncing Owen and trying to keep him amused, Eddie suddenly leapt at me with the challenge, “Sing him the first song that comes into your head NOW!”

Have any of you heard the lullaby version of Angel of Death by American thrash band Slayer? Just goes to show, it’s not what you sing, it’s how you sing it! (Incidentally, Tori Amos‘s version of Slayer’s Reign In Blood is quite, quite special. If you’re into dirge-like piano pieces overlaid with haunting female vocals. Hunt it out on iTunes.)

I also discovered that the opening lyrics for Queen‘s Bohemian Rhapsody take on a totally different feel when you’re singing it gently as a lullaby to a baby. Especially these lines:

Mama, life had just begun,
But now Iâ€™ve gone and thrown it all away,
Mama ooooooh,
Didnâ€™t mean to make you cry,
If Iâ€™m not back again this time tomorrow,
Carry on, carry on, as if nothing really matters,

Too late, my time has come,
Sends shivers down my spine,
Bodyâ€™s aching all the time,
Goodbye everybody Iâ€™ve got to go,
Gotta leave you all behind and face the truth,
Mama Ooooooh
I donâ€™t want to die,
I sometimes wish Iâ€™d never been born at all…

It was at that point I went back to nonsense lyrics to a tune from Shrek. I’ll have to see if I can still find my comedy Shrek ears, I can see that this is going to be a regular gig. 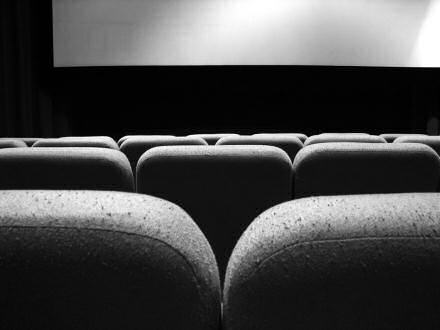 What we didn’t see this evening!

Hey, churchy people of the internet! Have you ever wondered what unchurchy people do on a Sunday evening who don’t have to sit in a cold building on a hard pew and listen to 1929-style Choral Evensong? Jane and I did some research this evening and found out. Obviously this report is based on only two people’s experience on one Sunday evening, and while you couldn’t exactly class it as scientific I don’t think it’s any less significant. Here’s what people do on a Sunday evening when they don’t have church to go to:

We decided that we wanted to do something special but also a little ‘escapist’ for the evening, and given that we’ve loaned our Harry Houdini Set to some friends that obviously was out.

“What about the cinema?” I suggested.

Jane looked up our local cinemas on the World Wide Web. But we couldn’t find them: our cinemas are nearer than that. So she looked them up on the Local Wide Web and sure enough there they were.

The only thing that grabbed my attention was the Steve Cougan and Rob Brydon film A Cock and Bull Story, which was on at the Vue cinema at the Omni Centre. My cousin Alan recommeneded it when I saw him yesterday.

So we jumped in the car and drove down to the top of Leith Walk, which co-incidentally is where the Omni Centre is located. We stood in the queue, soon reaching the front.

“Next please!” shouted the sales assistant behind the perspex.

“One and a student for A Cock And Bull Story,” I asked, somehow managing to pronounce the title of the film in italics.

“There are no student discounts on that film,” the assistant said, “it’s only on in the Gold Class screen, I’m afraid,” he said.

“Don’t be afraid,” I reassured him.

“What?” he asked, a little confused.

He just looked at me.

What?! indeed. Jane agreed with my ‘WHAT?!’ and we walked back to the car. “Our lunch didn’t cost that much,” she said. So we just drove home. The long way. Via Leith.

But don’t feel sorry for us, because now we know that there must be thousands, if not hundreds, of people who face that level of disappointment each and every Sunday evening.