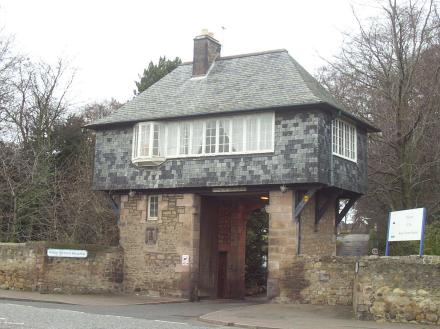 One of the entrances to the Royal Victoria Hospital.

Today I celebrated a Eucharist at St Ninian’s, Comely Bank for the first time. It was quite a lovely wee service, using the 1970 Scottish Liturgy (the grey book), followed by coffee in the hall. I look forward to going back and becoming more involved in that community for the next few months.

On my walk back to the car, which I’d parked across the road from the Royal Victoria Hospital, I noticed this entrance (above) to the hospital. I’ve seen it loads of times before as I’ve driven or cycled past, but today I stopped and really looked at it properly for the first time.

It’s great! It looks like a perfectly normal bungalow. Built on top of a … well, it’s not even a proper arch! It’s definitely an entrance, though. It’s a bungalow built on stilts, and as far as I know it’s not built on a flood plain. It’s the sort of thing I used to build with Lego™. And if you look closely the walls have all been slated, as though the slater (roofer) just got carried away.

“Right! I’ve finished putting slates on the roof … You know what would look really cool …?”

A couple of hours later.

I suspect that it originally had more windows too! I mean, the whole bungalow there does look a bit like the roof for the non-arch, so I’m not surprised that the slater got confused!

I saw a light on in there as I passed, so it must be used for something. A gang hut for the nurses, perhaps?