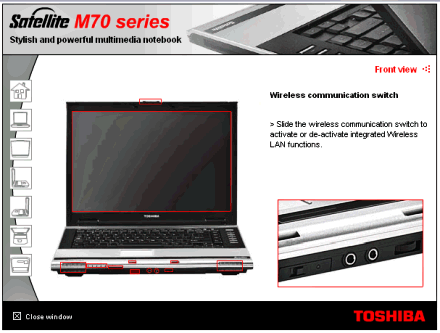 Beware: there’s a switch on some laptops that disactivates the WiFi card. It can take some effort to discover it, however!

Last night while I was round at my parents-in-law I said that I’d help my father-in-law set up his new Toshiba Satellite M70 laptop. I’d already been around a few weeks before and set up their BT broadband.

“Is it connected to the broadband?” I asked.
“No.”
“Okay … do you have the information I left when I set up the broadband? We’ll need the router name (SSID) and the WEP key.”

They did, and I duely entered them. I then entered them again, this time spelling “duly” correctly.

“Right … that should connect now.”

Would it? No! In fact, it didn’t work for the next thirty to forty minutes. I tried everything that I could think of. I even installed the excellent NetStumbler to see if it could sniff out any local networks to determine whether it was just theirs that I couldn’t see.

It couldn’t see anything! Nothing at all. Which was weird because Jane’s Mum’s laptop could see two networks including their own. “Weird,” I thought, “it’s almost as though the WiFi card isn’t switched on … but it says here that it is activated.”

Turns out that these fancy new Toshiba laptops have a physical switch at the front of the case to physically switch on or off the WiFi card. It’s for use in hospitals and onboard aircraft.

When I flicked the switch then it connected! I think there’s a lesson there for us all.