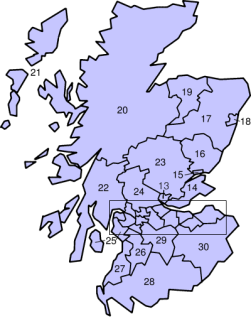 Here’s a page on Wikipedia that I wish more web designers who write UK address forms would read: Subdivisions of Scotland.

It annoys me when I come to fill in an online form that the form designers haven’t done their homework and instead present me with an outdated list of Scottish regions from which to choose.

Living in Edinburgh I’m usually presented with either Lothian, which no longer exists, or Midlothian, which is south of Edinburgh and includes Dalkeith and Penicuik (I once managed to convince an English friend that it had a soft ‘c’ and was thus pronounced Penis-wick; it’s actually pronounced Penny-cook.).

To be fair, it wasn’t until I moved to Edinburgh in 2003 that I discovered the various regions and districts of Scotland that I’d been taught in school had been abolished on 1 April 1996, in favour of the current 32 local authority council areas of Scotland. I remember at primary school learning that Scotland had nine regions: Borders, Dumfries and Galloway, Central, Fife, Grampian, Highland, Lothian, Strathclyde and Tayside, and within those 56 districts. I was living in London in 1996, which is probably how I missed the change. Now there are 32 local government areas in Scotland, with some councils sharing responsibility for Police and Fire, Health, and Sheriff Courts. Nothing is simple these days, is it!

So a gentle plea to web form designers: please replace “Lothian” on your forms with City of Edinburgh, West Lothian, Midlothian, and East Lothian. And include the other 28 regions … sorry, areas too.