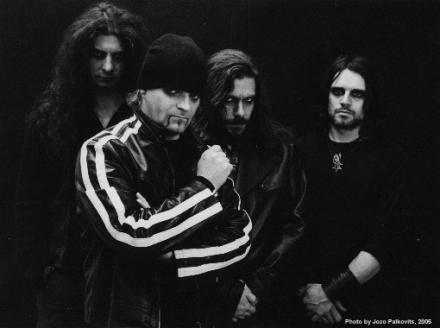 One of the first metal bands I ever got into was the Swiss avante-garde thrash band Celtic Frost, thanks to my school friend David Watson; now Dr David Watson, PhD — he did his doctorate asking the question “Does water seep through concrete, and if so how fast?”. Four years later his results were, as any resident of a dilapidated council tenement will readily tell you, “yes” and “slowly”. Anyway, back to Celtic Frost.

Celtic Frost were amongst the pioneers of the whole trash metal scene, having emerged from the ashes of frontman Tom G. Warrior’s previous band Hellhammer. And yesterday I discovered that metal ‘supergroup’ S.O.D (featuring Anthrax‘s Scott Ian and Charlie Benante) had written a tribute song entitled Celtic Frosted Flakes — do you see what they did there? — the lyrics of which will probably not mean anything to about 99.9% of you, but here they are anyway, because they made me laugh (CF song titles are in italics):

Celtic Frosted Flakes
by Stormtroopers of Death, Bigger Than the Devil, 1999.

Tom Warrior fell from a tree in Cherry Orchard,
Martin Ain drowned in a Cold Lake,
Reed St. Mark went To Mega Therion,
And remains there ’till this day.

Tom Warrior is waiting for the Emperor’s Return,
Martin Ain’s trapped in the Circle of the Tyrants,
Reed St. mark was blinded in the Crypt of Rays,
Where he remains ’till this day.

Whatever happened to Celtic Frost?

The great news is that Celtic Frost have a new album “Monotheist” coming out this Spring; their first in 13 years, featuring the following songs:

So some cheery stuff there! Now there is something to look forward to metal-lovers.