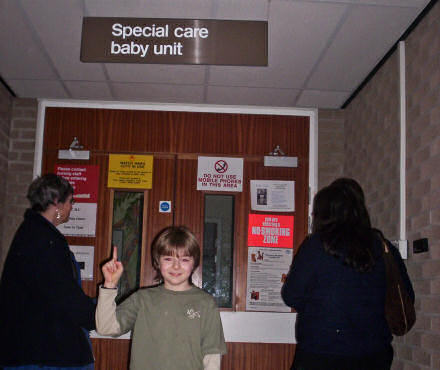 Benjamin standing outside the Special Care Baby Unit (SCBU) at St John’s hospital, Livingston. Sadly, because of regulations Benjamin wasn’t allowed in to meet his only cousin.

Driving back along the M8 towards Edinburgh, Jane was talking about how she has to be in Wick, Caithness, in the far north of Scotland on Tuesday morning to be involved in a number of interviews for a Duke of Edinburgh’s Award-related post.

“Did you know,” said I, “that Wick is that place that all the male owls in Scotland fly-to to chat-up the female owls?”
“Really?!” exclaimed my sister Jenni, sounding quite excited by that idea.
“Yeah,” I replied, “all the owls go to Wick to woo.”

It took me about 10 miles to stop laughing at my own joke. And that was only because we’d stopped at a chip shop in Edinburgh and I was too busy stuffing my face with chips to laugh!

Just as we were arriving in Selkirk Jane got this SMS text message from my brother Eddie:

Owen is still in special care unit, but is feeding for ages and seems fine. He is out of incubator and hopefully will be back on ward pretty soon. E x

which is great news. So thanks for all the prayers so far, saints. Time for bed now. But before I go, just to explain: this post’s title comes from a competition that one of the London broadsheets ran in 1996 to come up with pithy sayings. Others included “You can take a horse to Wembley but you’d be in the wrong place” and “Fingers for hands, toes for feet!” I feel that the world is a more beautiful place now because of these. Bed, I think…

3 thoughts on “A man in a sack troubles no owl”