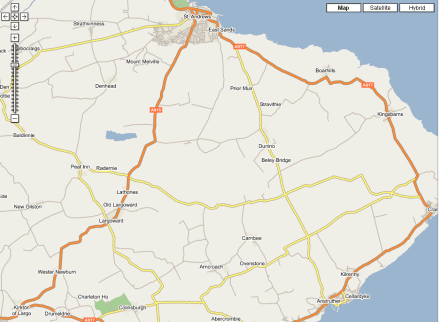 Map of part of the East Neuk of Fife. Cellardyke and Anstruther are at the bottom right, St Andrews is the big town at the top of the map. (Map from Google Maps.)

Having just returned from the GP (more on that in a moment — depending on how fast you read, I guess) and I’m just about to pack an overnight bag. We’re heading over to Cellardyke essentially just to alter the timed heating, so we’re going to take the opportunity and spend the night there.

Can you believe it, we’ve had the house just over a year now and we’ve not yet been able to spend a whole week there uninterrupted?! I need to return to Edinburgh tomorrow for a Powerpoint band rehearsal; the Powerpoint Christian youth event is on Friday night. Still, it will be nice to get away … and still be able to sleep in our own beds!

So, back to the GP visit. The other night I showed my Mum a bump on my head that’s been there for quite a while now. It’s not really bothered me until now … now that my hair is receeding and I’m now beginning to look like some kind of distant cousin of the Klingons!

I’ve always assumed that it was simply a scar from knocking myself unconscious at a Borders Scripture Union summer camp at Grantshouse in 1984 or 1985. But Mum took a look at it and said, “I think it’s a sebaceous cyst” (Don’t follow that link if you are squeamish! — there are no photographs, but the description isn’t great. :S).

Don’t you just love the DIY attitude of members of the medical profession! (Mum was a Nursing Sister for many years.)

Dr Abushal didn’t think that sticking a needle into it would do any good. “It needs minor surgery,” said he. So they are going to make an appointment for me to see their minor surgery specialist, and if she thinks it needs to be done more neatly then I’ve to be referred to the plastic surgery unit at St John’s Hospital, Livingston.

In the meantime, it appears that I’m still recovering from the virus that floored me last month, and I just need to keep pacing myself, resting and doing some gentle exercise, as I have been doing.

Off to Cellardyke … I’ll tell you all about it tomorrow.