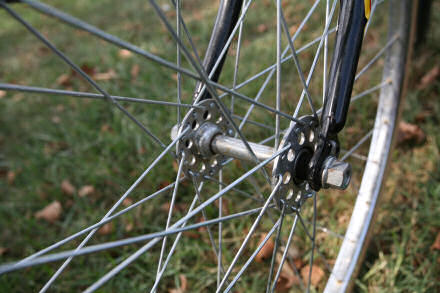 Out twice this week on our bikes?! You’d better believe it. I returned home from church just before midday and an hour later we had our cycling gear on and were out on our bicycles tearing up the back streets of Cramond.

This was only our third time out since we decided that we really did need to get out and exercise more — me especially, but I’ll write more about that another time. We consciously took the same route as last Thursday: Drum Brae to Cramond Road South and on to Davidson’s Mains then back up Queensferry Road to Drum Brae, and back home.

I learned today that I don’t get enough energy from a banana roll eaten one hour before going out; my legs felt like lead most of the way round. It was so cold too (around 1°C) that it took me about 25 minutes to feel warmed up and begin to really enjoy the cycling.

Still, we followed the same route as Thursday and knocked a couple of minutes off. Here’s the data from my Cateye Velo 8:

The thing I was most pleased with was getting just above 30 mph pedalling down Queensferry Road (which is a 40 mph). The 37.4 mph was free-wheeling down Drum Brae — I’ll have to watch that in future. And at least during this time out we weren’t chased down the road by a dog!

All we need to do now is keep at it. I’m determined to get fit again.