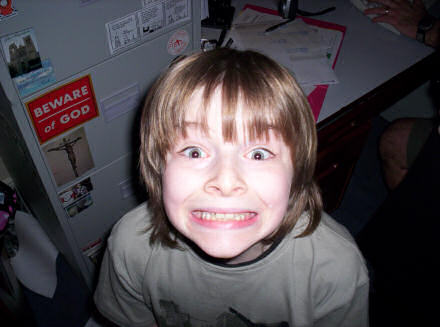 My nephew Benjamin, taken on his new camera.

Today I had an unexpected visit from my sister Jenni and her son Benjamin. When I say “unexpected” I mean that I knew that they were going to be in town, and the last I heard Jane and Rebecca (my brother’s wife) were going to meet them in town and bring them to the Gyle shopping centre for lunch.

So imagine my delighted surprise when Jenni phoned at 11:00 am to say that they were nearly finished shopping, and exchanging too-small Christmas gifts — by which I mean Christmas gifts that were too small, not that Christmas itself was diminuitive this year — and did I want to meet up with them? How could I turn them down! So I gave them instructions on which bus to catch and which stop to get off and they came over to our house for lunch.

The rest of the afternoon was spent speaking with Jenni, playing Lego Star Wars with Benjamin and occasionally letting him look for photographs of tiny monkeys on Google.

He also looked for … oh! more pictures of tiny monkeys, a poster for The Lord of the Pugs and ring tones.

All that worry that people have about needing to install Net Nanny software. No need! Ten years only want to search the internet for photographs of tiny monkeys and ring tones.

And pugs, pugs and clocks. Clocks with pugs on them.