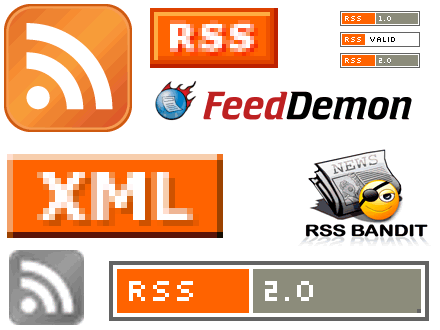 Yesterday, I was quite surprised to read in a Yahoo! report that awareness of RSS is low among Internet users. The report, based on a survey, discovered that only 12% of Internet users are aware of RSS, while only a third of those (4%) have actually knowingly used RSS! It’s time to do something about that, I think.

Depending on who you speak with RSS can mean either “Rich Site Summary” or “Really Simple Syndication”. I prefer the latter. The observant amongst you will have noticed over the last couple of days a few new pages going up on this blog, including one called What is RSS?.

As there are now billions of web pages on the internet, keeping up to date with your favourite websites can be a time consuming business. Up until now you will have had to click from site to site to find the information that you want.

But now you can have all the latest news delivered directly to your computer using a clever service called Really Simple Syndication, that is as quick and easy to use as downloading your e-mail.

This information is delivered as an XML file called an RSS feed, RSS stream, or RSS channel. An orange rectangle with the letters XML or RSS is often used as a link to a site’s RSS feed. This is slowly being replaced with the orange RSS ‘broadcast’ icon that you can see on this site, such as this one:

RSS, which stands for ‘Really Simple Syndication’, takes the hassle out of staying up-to-date with your favourite websites, by allowing you to identify the content that you like and having it delivered directly to you.

It is now very common to find RSS feeds on most major web sites, as well as many smaller ones. Most blogs these days now carry an RSS feed.

As an example, I’ve set up a page on this website that collects the latest 5 stories from the following websites: BBC News, BBC News Scotland, The Scotsman Edinburgh-specific news, Jonny Baker’s Blog and GadgetVicar’s Blog.

The software (in this case a WordPress plugin called Feed List) has queried each of these websites and downloaded the news feeds. It presents in each case the latest headlines (or blog post titles) and an excerpt of each story. (You’ll notice that GadgetVicar’s feed is set to share the entire feed text rather than just an excerpt.)

Obviously I can’t just set up a page with all your favourite news and blog feeds — I don’t know what you like.

So, you will need a software application called a News Reader, (sometimes also called a Feed Reader, or News Aggregator) which can check RSS-enabled webpages, such as this one, and display any updated articles that it finds.

There are many different versions available. Some are accessed using a web browser (such as Mozilla Firefox), while some are downloadable, standalone applications that you need to install.

You can find a list of RSS News Readers on the Google Directory. These are organized into categories by operating system (eg Windows, Mac, Linux) and those that are web-based; many are free to use.

Whichever version you chose it will allow you to subscribe to and display the RSS feed that you want. The software typically downloads an excerpt of each of the latest news stories from the feeds that you have subscribed to, along with a link to read the full version of the content.

My favourite RSS Reader for Windows XP is FeedDemon by Bradbury Software, which you have to buy (it currently costs US $29.95 / £17.50). I’ve also used RSS Reader, which is free, and RSS Bandit which I’ve only just discovered and really quite like the look of.

Mozilla Firefox‘s Live Bookmarks are also very good, although perhaps not so good if you check a lot of RSS-enabled sites each day.

I’m told that the RSS features in the Mac-only Safari browser are the best.

How to use RSS Bandit

As an example I’m going to use the RSS Bandit, because it’s free and easy to use. 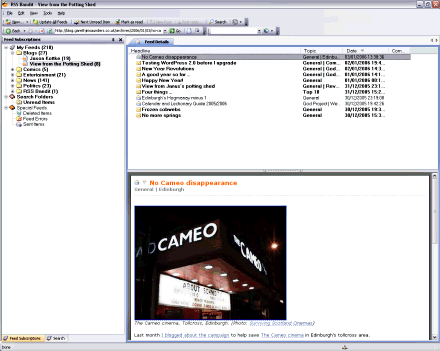 A screenshot of RSS Bandit.

That’s all there is to it. If you want to find out more read through the RSS Bandit Help website for walk-through guides on all the ways to subscribe to new feeds, how to find feeds, how to customize the look of RSS Bandit, and a whole lot more.

2 thoughts on “RSS and why you need it”