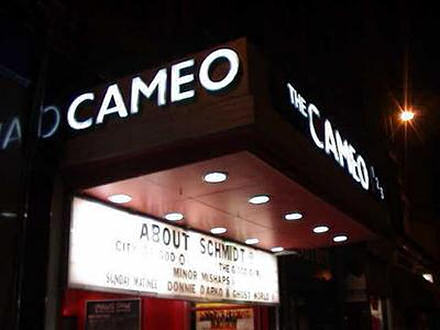 Last month I blogged about the campaign to help save The Cameo cinema in Edinburgh’s tollcross area.

Great news: the campaign has been a success! I just read about it on the Edinburgh Evening News website:

Campaigners battling to secure the future of the Cameo cinema were celebrating a double victory today after its owner abandoned controversial plans to convert its main auditorium into a bar-restaurant.

City Screen, the London-based owner of the Tollcross cinema, has officially withdrawn the planning application for the overhaul after a wave of protests.

The chances of the building being sold to new owners who would keep running it as a cinema have also been increased by the invervention of the city council.

The local authority, which owns part of the Cameo building, has refused to renew the present owners’ lease, which is due to run out in three years time.

The council says it wants reassurances about the future use of the building before agreeing to extend the lease.

Great news indeed. It just goes to show that not all (local) government decisions are made by numpties, or based on policies that bear little resemblance to the needs of real people and real situations.

For those of you who’ve never been inside The Cameo, check out these photographs of the exterior and interior of the cinema at Surviving Scotland Cinemas.

I grew up in Selkirk, in the Scottish Borders, where we didn’t have a cinema. Our closest was the Kingsway in Galashiels, which before it was the Capitol, and before that the Playhouse. (You can see photos here.) It is now called the Pavillion, and thankfully they did away with the garish 1970s-style facade. I remember when the plans were mooted to reopen the Kingsway as the Pavillion I read in our local newspaper that they were converting the space from one screen to four screens. I began telling people that that simply meant they’d have one cinema and three televisions in the foyer!

I was wrong. It has four cinema screens. Sometimes my Mum’s cousin and his wife go near the end of a film’s run and get the small screen all to themselves. Mind you, Jane and I have been known to get that here in Edinburgh! I love the cinema.

One thought on “No Cameo disappearance”