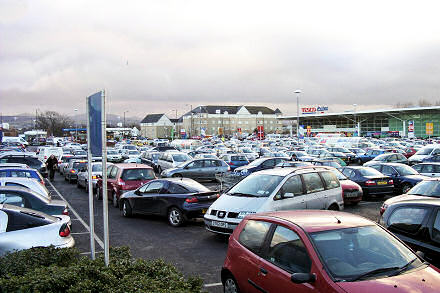 A long queue of cars at a standstill waiting to get out of the Tesco car park today.

How glad am I that I didn’t take the car down the road to do some “first-minute” Christmas shopping! (I had planned on doing it a couple of weeks ago, but got sick.)

Despite still feeling physically wobbly and weak, I felt that it would have been rude not to get Jane and my brother something for Christmas, and with a couple of cheques to pay into the RBS my mind was made up.

Hmm… But should I take the car down or not? It’s not far, about 1 mile, but I’m wobbly. I could just park nearby on a side-street at the bottom of the road. But what if everyone has thought that? In the end I wrapped up warm and headed out, having hunted unsuccessfully through the house for my winter hat. Turns out, it was in my coat pocket all along!

Here’s what I discovered:

Last year I was speaking with someone who works at our local Tesco who said that in the days leading up to Christmas they were taking in over £1,000,000 a day. Over one million pounds each day?! That’s incredible. But then our local Tesco is the size of a small town with a car park that any half-decent factory in Detroit would be proud of.

I’m glad I didn’t take the car in the end. The roads were congested, the car parks were worse-so. And I got a bit of exercise, to boot. Come the New Year I must find a healthier way to balance life. More exercise, less chocolate. More cycling and public transport, less taking the car. That’s the plan.

I bet it snows!