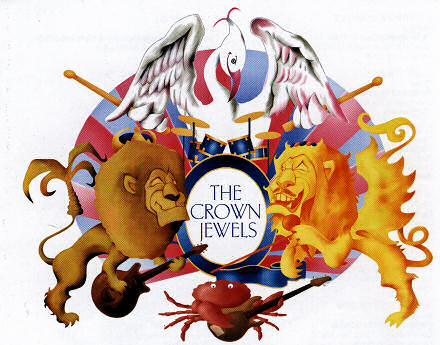 Amusing reworking of the classic ‘A Night at the Opera’ album cover by Queen, which was drawn by former art college student Freddie Mercury.

I love Queen. This year (2005) has been the twentieth anniversary of their classic album “A Night at the Opera”, and therefore also of Mercury’s extravagant magnum opus Bohemian Rhapsody hitting the #1 slot in the charts.

Classic Rock magazine this month features Freddie Mercury on their cover, and includes a fantastic cover CD called “The Crown Jewels – A Tribute to Queen” which you will not be surprised to learn contains twelve Queen songs played by a wide variety of artists.

From the inlay sleeve:

Elsewhere, the CD is littered with members (past and present) of Dream Theater, Kiss, MSG, and Racer X …

Ones that got away? Well, late in the day we did discover that Bruce Dickinson recorded a version of Bohemian Rhapsody with Freddie’s pal Montserrat Cabballe. Which was news ever to Iron Maiden‘s management.

Now I would have paid extra to hear that one! And if one cover CD wasn’t enough this month, Uncut magazine have a CD entitled John Peel’s Festive 15 featuring, amongst others, Half Man Half Biscuit, The Sugarcubes, Billy Bragg, The Bhundu Boys, and Pavement — all of them artists that I discovered listening to John Peel’s late night shows on BBC Radio 1. Festive stuff indeed.

3 thoughts on “A Tribute to Queen”