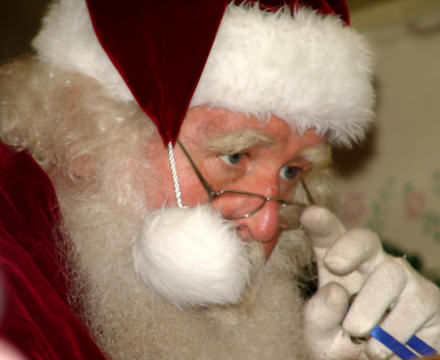 The real™ Santa Claus, as spotted at stock.xchng.

There is an article in today’s The Scotsman newspaper entitled “Santa is far too scary for children, says government”.

The highlight of any Christmas party for generations of children has been the moment when the lights dim, voices hush and the sound of sleigh bells signals the imminent arrival of Santa Claus.

But that magic moment has come under threat from government advisers who have told teachers that children should be protected from the “terrifying” appearance of Santa at school Christmas parties.

Pantomimes are also regarded as psychological “scene of crime” sites, with teachers told to seat nervous pupils near an exit.

“Where on earth do they get the evidence for this kind of nonsense?!” thought I. And then I remembered this post on my very own blog: Scared of Santa, which points to the Scared of Santa Gallery, from which this is an example:

But what about this advice in a box-out entitled “Green Christmas”:

Children should give “experiences” instead of Christmas presents and stop sending cards to cut waste, according to government advice.

I’m not even sure that I fully understand what it means to give “experiences”, how is a child supposed to comprehend it?! Do they mean like wedgies, dead-legs or ‘Chinese burns’? Maybe bullying? Or an invitation to see Santa.

I tell you, the world is going mad.

3 thoughts on “Santa is far too scary for children …?!”