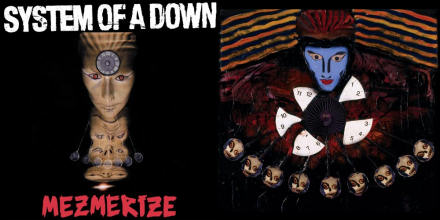 I imagine that you, like me, have two hands — apologies and commiserations if you don’t — and that you probably favour one more than the other. By that I mean you use one hand more than the other, for writing for example, or opening doors; I don’t mean that you buy your right hand little treats or take it out for outings while leaving your left hand at home. That would just be ludicrous!

We each have two hands and no matter how much we usually favour one of them we actually prefer the fact that we have the two, and most jobs are made the more easy when you use them both.

For the last couple of weeks I’ve been listening to the two System of a Down albums: Mesmerize and Hypnotize which are a bit like that. The two albums are part of a package (and they literally are: you slide the packaging of one into the other to create a unique double album cover) and no matter how much the might prefer Mezmerize, which was released first and stands on its own as a more cohesive collection of songs, it actually makes much more sense when the two albums are played together, back to back.

I first discovered System of a Down (SOAD) in the Pear Tree House pub in Edinburgh one night while I was there with some Joinees. They weren’t there, of course, one of their songs was playing on the stereo (I think it was “I-E-A-I-A-I-O” from Steal This Album).

As well as holding a catchy tune the song “Sad Statue” has this chorus:

What is in us that turns a deaf ear to the cries of human suffering
Suffering, suffering now

Such subtlety and strength of expression wrapped up in so few words. And not just a criticism of the governments but of the rest of us too. Why do we turn a blind eye and a deaf ear to all the hurt that is going on in the world? And why is it that it’s musicians that are reminding us of this, and not the Church? (Maybe we’re deaf to the church’s voice too.)

And where has all the public support for Make Poverty History gone? Why have we forgotten so quickly? (I speak to myself, as much as to anyone else.)

We watch all this stuff on the news. But it’s entertainment! It’s not real. Is it?

I’m just sitting in my car
And waiting for my …

I love bands like System of a Down, not just because of the music (which is great, inventive, inspiring), not just because of the lyrics (which are acidic, intelligent, compelling) but also because they remind me that I do have two hands, and that sometimes we’re called to use them to make this beautiful but at times deeply troubled world a better place.