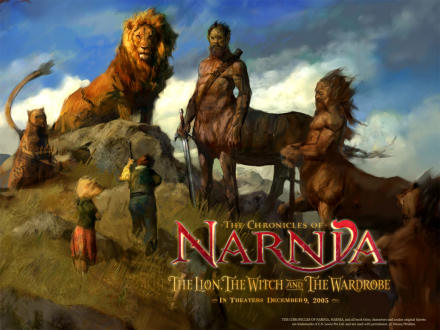 Film poster for The Chronicles of Narnia, from the official Disney Narnia website.

Lying in bed this morning, listening to Radio 4 the presenter spoke about the film The Lion, the Witch and the Wardrobe, which opens this later week, as being the first book in The Chronicles of Narnia.

Now that woke me up! “No it’s not!” I said to the radio, sitting up in bed. “It was the first written,” said I, “but it’s not the first chronologically.” But the radio presenter wasn’t listening to me, and ploughed on.

I found a very good internet article entitled What Order Should I Read the Narnia Books in (And Does It Matter?), from which this is the opening section:

C.S Lewis’s famous series of children’s stories were published between 1950 and 1956, in the following order:

All current editions of the books, however, number them in a slightly different order:

This order reflects the chronological sequence of events in the books themselves.

Lewis expressed a mild preference for this second, chronological order. In a letter written in 1957 to an American boy named Laurence, he wrote the following:

“I think I agree with your order [i.e. chronological] for reading the books more than with your mother’s. The series was not planned beforehand as she thinks. When I wrote The Lion I did not know I was going to write any more. Then I wrote P. Caspian as a sequel and still didn’t think there would be any more, and when I had done The Voyage I felt quite sure it would be the last. But I found as I was wrong. So perhaps it does not matter very much in which order anyone read them. I’m not even sure that all the others were written in the same order in which they were published.”

Quoted in Letters to Children

… The case for reading the books in chronological order is the self-evident one: it makes more sense, particularly for children, to read a series of stories in the order in which they happened.

So there you have it. If they are planning on making films of all seven books then it looks like they’re taking a cue from George Lucas and making them out of sequence.

One thought on “The order of the Narnia books”