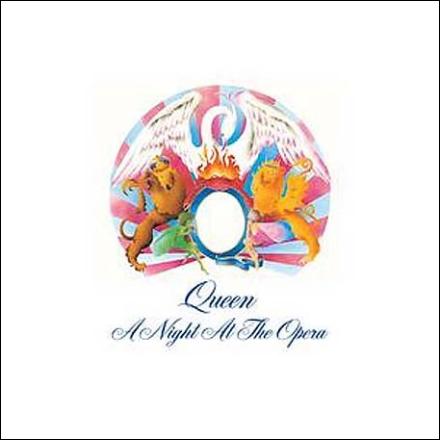 Classic cover designed by Freddie Mercury for the album “A Night At The Opera” featuring the zodiac signs for each of the band members: cancer, gemini, and two leos. It was redesigned for the band’s follow-up album “A Day At The Races”. Both albums were named after Marx Brothers’ films.

Can you believe that it’s 30 years since Queen‘s classic album A Night at the Opera was released? The album that many regard as the definitive 1970s Queen album.

To mark this event Queen have released the album as a special collector’s edition, in a remastered stereo format, and on DVD in DTS 5.1 Surround Sound. The DVD also includes a few videos, rare footage, on-screen lyrics and a commentary. Read about it on the Queen website and check out the online sampler.

I have this album on LP (12″ 33rpm), cassette and CD. The only other albums I have on those three formats are Queen Live Magic and Metallica …And Justice For All; I have Big Country The Seer on LP and CD.