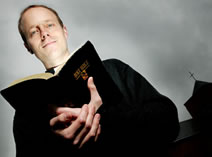 I watched the second of three episodes of Priest Idol on Channel 4 this evening. It was both encouraging and heart-breaking.

Priest Idol sees 32-year old Anglican priest, Fr James McCaskill (right), arriving at a parish in Lundwood, Barnsley with the view of trying to build it up. In this evening’s episode, the diocese brought in a marketing company who spent time in the church building on a Sunday (with its congregation of nine), and asked people in the local community what they thought of church.

It was fascinating, enlightening and encouraging that the local people were consulted. I wish I’d had the courage to do that at St Salvador’s a couple of years ago. I firmly believe that we need to do that more often.

The marketing company came up with a campaign entitled “Church Lite: It’s better for you”, which didn’t sit well with a lot of the congregation and diocesan members asked. It wasn’t that the message was being dumbed down, but an understanding that a lot of people today want less-stuffy, less-formal, and the ‘Lite’ connects with things that are more healthy for you.

What was sad was how deeply entrapped in church culture and tradition some of those interviewed appeared to be. So utterly apart from the general population in their understandings, tastes and opinions. Fr James was utterly right when asked why there was such opposition to the movement of the font. “Because it was there. Because someone a long time ago put it there. If you place a chair somewhere, and thirty years later move it you can create a church split.” It’s true! I’ve been involved in something similar.

The Church has an amazing potential. We are essentially about sharing the good news of Jesus. Good news! Good news! That’s what ‘gospel’ means. Though you’d be hard pressed to realise that we did have some good news from many a service I’ve been to — including some I’ve presided at, I’m free to admit.

God loves us — God loves you, with all his heart. And what we’re about on a Sunday morning, or any other time that the Church meets, is about worshipping (giving worth to) God and giving God thanks for that love. There’s more to it than that, but that’s a pretty good place to start.

One thought on “Priest Idol”