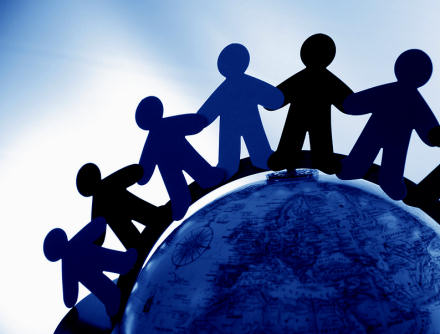 Hackers of the World, Unite!

I’m finally getting somewhere with this talk entitled “Where is God on the Internet?” for tomorrow evening, but it could very well be a long, long night ahead of me. Or early morning. Or both.

I’ve been reading through a number of books I got from Amazon about the Church, the Internet and God. But none of them really said what I was looking for. I wanted something beyond the usual: “use email, chat rooms and forums to build and foster community”. That seems somehow too easy an answer. “If you build it they will come”, might work for a Hollywood movie, but I’m not sure that the general public are taken in quite so easily.

This short (and thin) book has only four chapters:

While flicking rather desperately through the book this afternoon, looking for inspiration I read this quotation from Manuel Castells, a professor of sociology at Berkeley University in California:

“The Net is much more than a new technology, it is a civilization shift.”

I then turned to another book that Manuel Castells had contributed to called The Hacker Ethic by Linus Torvalds, Pekka Himanen and Manuel Castells (Vintage, 2001) ISBN 0099426927.

I first read this book a few years ago, while I was living in Inverness. At the time I found the book quite inspirational; one of the best, most exciting books I’d ever read. In it Himanen challenges Max Weber‘s Protestant Ethic in favour of what he calls “The Hacker Ethic“, that is “the belief that information-sharing is a powerful positive good, and that it is an ethical duty of hackers to share their expertise by writing free software and facilitating access to information and computing resources wherever possible” (from Wikipedia).

For Torvalds [creator of the Linux operating system], the basic organizational factor in life is not work or money but passion and the desire to create something socially valuable together.

An article in .net magazine this month led me to another online resource that I’d never come across: The Cluetrain Manifesto by Christopher Locke, Rick Levine, Doc Searls, which is published online (keeping true to the hacker ethic!) as well as in book format.

In their introduction they write:

A powerful global conversation has begun. Through the Internet, people are discovering and inventing new ways to share relevant knowledge with blinding speed. As a direct result, markets are getting smarterâ€”and getting smarter faster than most companies.

These markets are conversations. Their members communicate in language that is natural, open, honest, direct, funny and often shocking. Whether explaining or complaining, joking or serious, the human voice is unmistakably genuine. It can’t be faked.

Most corporations, on the other hand, only know how to talk in the soothing, humorless monotone of the mission statement, marketing brochure, and your-call-is-important-to-us busy signal. Same old tone, same old lies. No wonder networked markets have no respect for companies unable or unwilling to speak as they do.

Their 95 Theses (purposefully named after Martin Luther‘s 95 Theses which brought about The Protestant Reformation in the 16th Century) call for corporations to move from being closed networks to being open and human with their markets, who have already begun to communicate in powerful ways.

As I read their theses I began to wonder how much this might also apply to the Church, the Institutional Church, which sometimes acts like a giant corporation. I began to think about the rediscovery over the last ten years of God as Trinity, and its implications for ministry: that ministry is not reserved for a few ordained people but is what all the people of God are called to.

It occurred to me that thesis #7 “Hyperlinks subvert hierarchy” was saying something similar to what Robin Greenwood was saying in his excellent book Transforming Church: Liberating Structures for Ministry (SPCK, 2002) ISBN 0-281-05208-5:

Of course thinking about the nature and task of the Church is relatively unimportant if we continue to associate it mainly with the limited concerns of clergy and their chosen helpers to keep something going; Church is unimportant if we see it excluding all that we do when we’re busy in our primary vocations of so many kinds…

The Holy Spirit seems now to be inviting us to be a Church:

… Of course the Church is dying; that’s the only way to know resurrection, going down the tubes into God’s unfolding future.” (pp.147 f.)

While I’m not saying that the Internet is the saviour of the Church, it just seems to me interesting that while the nature and ethic of the Internet is moving towards subverting hierarchy and replacing it with a connected network of people communicating on an equal basis so the Church is also questioning the nature of its ‘traditional’ hierarchies in favour of shared ministries — not because there is no money (and there isn’t!) but because made in the image of God we feel a yearning to live our lives modelled on the relationship that is God the Holy Trinity: Father, Son and Holy Spirit; Creator, Redeemer and Holy Spirit.

Evrsoft have been promising an upgrade (“First Page 3.0”, I think it was going to be called) to their excellent 1st Page 2000 since as far back as 2002, and despite various promises along the way we’re still waiting for the final product.

Despite signing up for their email newsletter, which I was assured would inform me of any updates to the release of a new product, it was only because I happened to visit the Evrsoft website last night that I discovered that First Page 2006 has been released as a Beta version, for developers to check out and comment on.

I’m disappointed that we weren’t emailed about this — that’s why I signed up! and why I checked that I had on more than one occasion! — the Beta was released, it would appear from the forum, on 4 October and will stop working on 1 December 2005. I don’t have that much time then to test it very extensively.

My immediate impression sadly isn’t very favourable. I was expecting a web text editor that was at the cutting edge, as 1st Page 2000 had been in its day. But despite there now being a wider variety of page templates available: HTML 4.01, XHTML 1.0, XHTML 1.1, CSS, Java, JSP, PHP, XML, with appropriate code syntax highlighting (that is the code is colour-coded to make it easier to read) the keyboard shortcuts still default to HTML 4 tags and there doesn’t appear to be any way of editing these.

Editing the QTags, which allow for drag-and-drop tags to be added from a side pallette to the page can be updated but XHTML isn’t an option! Neither is there an option for CSS properties, which would be great. This doesn’t seem to me to be acceptable for a modern web developer product. I can only hope that this is something that will be corrected in the final edition.

The built-in HTML reference (which is oddly subtitled “The complete HTML 4/5.0, CSS, SSI reference” — what is HTML 5.0?!) is also stuck in 1998 with HTML 4 and while the Cascading Style Sheets help looked promising it is copyrighted 1997. That’ll be CSS1, then. CSS3 is on its way!

I’ll take a more thorough look at First Page 2006 soon and post my comments my blog, as well as to the Evrsoft forum.