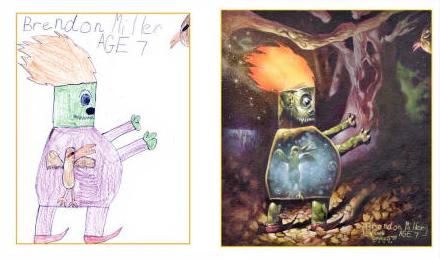 If you read James Frost’s blog then you’ll have come across this already. If not then you’re in for a treat. I discovered it again, sorting out my Firefox bookmarks.

Artist Dave Devries has a Monster Engine: children. It’s one of those “Why didn’t I think of that … and why can’t I paint as well as him?” ideas. First get children to use their imaginations and draw whateverthehelltheylikesolongasitsamonster, and then get a professional artist to make it look as real as possible. The results are quite special.

His first book The Monster Engine is now available, and is the first in a series that may include The Circus Engine, The Dinosaur Engine and The Hero Engine.

Take a look at some of the art, and then read the interview with Big Blok’s creator, seven year old Brendon Miller. Aren’t children’s imaginations amazing! 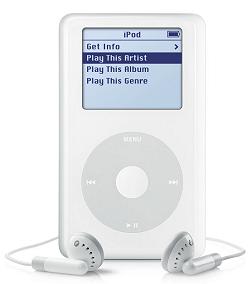 What way will the iPod generation play?

At my sister-in-law’s wedding a couple of months ago, Peter Neilson mentioned in his sermon about the current generation being the “iPod generation”: Insecure, Pressured, Over-taxed and Debt-ridden.

I found this online article by The Times’ Economics Editor, David Smith, called “Anxious life of the ‘iPod’ generation” who writes:

“We have always worked on the assumption that each generation would be better off than its predecessors,â€ said Professor Nick Bosanquet of Imperial College London…

“But young people today have a lot more commitments and it is much more difficult for them to raise their incomes and generate wealth. This really is a very big issue for the country.”

According to the report, today’s generation lacks the confidence and ability to build on the economic foundations created by post-war baby boomers. Because they are indebted, they are also risk-averse; levels of entrepreneurship among Britain’s young are lower than in America, Australia, New Zealand and Ireland and have fallen over the past decade. Many opt for what appear to be safe jobs offering a good pension. Others have to take any job that is available to try to pay off their debts.

Once upon a time the priesthood may have been seen as being a ‘safe’ job, in terms of job security. But hey! when was the Gospel ever about safety, about playing it safe and not taking any risks? God coming to earth as a human, being born of a woman, living as a baby, a child and a young man was never going to be safe.

I’ve been thinking about what to do next. I’m still quite uncertain about what I’ll do, about where God will lead me. But I do know that I want to do something creative. 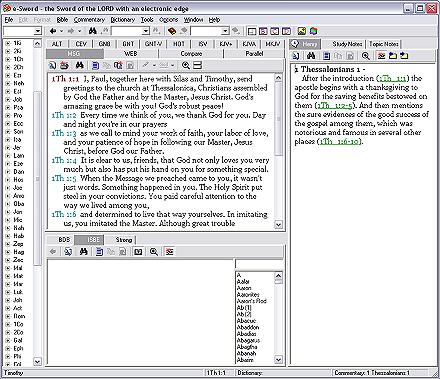 A screenshot of the free eSword Bible software for Windows.

Next up in my “I’ve been meaning to blog about this for ages” series comes the excellent eSword bible software. I’ve been using eSword for a couple of years now, and it’s now at the truly holy version 7.7.7. (Stryper would be proud of them!) There is also a version available for Pocket PC (or whatever Microsoft are calling their PDA version of Windows).

What I really like about eSword is its variety of Bible versions available. I regularly use The Message, Contemporary English Version (CEV) and International Standard Versions (ISV), as well as occasionally in Hebrew or Koine Greek. Sadly, the New International Version (NIV) and New Revised Standard Version (NRSV) are not available as their publishers haven’t granted eSword a licence.

The user-interface is really quite simple too: Select the version you want (of those you have installed) in the central section, and in the left-hand pane select the book and chapter you want to view. It couldn’t be more simple than that. If you have any commentaries installed you can access information from those in adjacent panes; or create your own study notes.

eSword also has a Compare function, showing your selected Bible verse in each version you have installed; or a Parallel function, allowing up to four versions to be viewed side-by-side.

Searching for a passage is a simple case of clicking Search and telling the software what you’re looking for, and in which version.

It’s certainly worth checking out. But if you want to download everything then you’ll certainly need a broadband connection as it clocks in at over 336 MB. 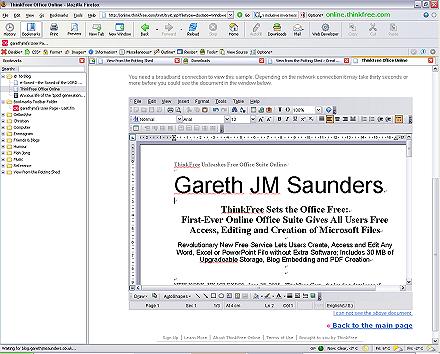 Screenshot of the ThinkFree Office Write application within a Firefox browser window.

Another potential blog post that’s been sitting in my “To Blog” bookmarks folder for a while is something that my friend James pointed me to a few weeks ago: ThinkFree Office. I quote:

ThinkFree Office 3 Write is a powerful word processing application that enables you to create professional-quality documents and web pages. With it, you can easily insert tables, images, clip art, or custom layouts into your documents and effortlessly proofread work with easy-to-use spelling and auto-correction features.

It’s a Java™ application so it will run within your web browser (assuming that you have the latest Java Runtime Environment (JRE) installed) giving you an instant, fully-working wordprocessor anywhere. (Well, anywhere you have a broadband connection!)

It really is rather impressive. At first it’s a little odd typing within an application within a web browser, but you soon get used to it. I could even print from it — which is great. To save your document you need to sign up (which is free).

If you’re away from your usual PC and just need a quick application to create or edit a Microsoft Office document, or don’t fancy downloading and installing the excellent free OpenOffice suite then consider opening an account with ThinkFree Office.

These girls are so hot they crave more than one at a time!

Email spam is a nightmare! It clogs up email servers and wastes bandwidth. And yet, day after day, our inboxes get filled with the stuff.

Rather than getting angry Sam K over at Quirky Bastards.com decided to get creative:

I get hundreds of spam e-mails per day. Rather than let them all go to waste, I figured why not put some of them — the ones with the really goofy subject lines — to good use? Ok, well, maybe not “good” use. Anyway, what follows are hastily-drawn and hopefully amusing interpretations of obscure and sometimes not-so-innocent subject lines of random spam e-mails.

Note that the subject of each spam e-mail I used appears as it was originally presented — mispellings, confusing punctuation and capitalization are all preserved. So any mistakes in the subject lines are intentional and not my fault.

View Sam K’s “Spam Art”. Some of it is hilarious.