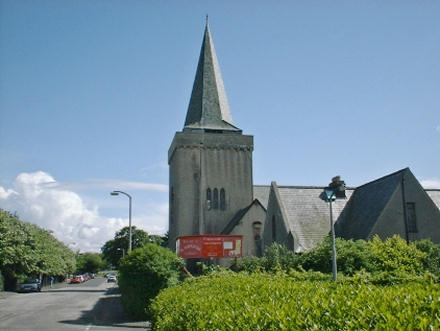 An old photograph of St Salvador’s. The church hall is no longer there, replaced now by residential flats. As have the trees on the other side of the road.

Yesterday, at St Salvador’s, Stenhouse (one of the two congregations that I serve) we had a visit from The Dean of the Diocese of Edinburgh, who is also a former Rector of St Salvador’s. Seemingly because I have a blog I made him nervous: what would appear on the blog today about his visit? Ahhh … the power of blogging! I don’t wish to disappoint …

The purpose of the visit was to discuss with the congregation the diocese’s plans for the continuing ministry at St Salvador’s. My appointment here will rapidly be coming to an end (April 2006) after which time there is no money to renew my ‘contract’. That’s just how things are in the church just now: money is tight.

But before the congregational meeting: worship. Fr Kevin preached and presided at the Eucharist; I was deacon. What I enjoyed most about Fr Kevin being there was being enabled to and allowed to worship, something that is sometimes hard to do when you’re presiding and co-ordinating the worship.

There’s a member of St Salvador’s who frequently says to me that she loves coming because it’s like a family. And like a family sometimes things don’t go quite as planned. And like a family it doesn’t matter, we just get on with it, and love one another though it. Yesterday, for only the second time in six years my phone went off during the service. During the sermon. It was a text message. The message tone was the CTU phone tone used in the TV series 24.

And then … I forgot the introductory words to the Peace. My mind went blank. I had the words from the older Scottish Liturgy 1970 going around my head. In the end I turned to Fr Kevin and said, “I’ve completely forgotten the words!”

“We meet in Christ’s name!” he exclaimed. And then, “My moment of glory,” after the congregational response, “Let us share his peace.”

Mind you, one of the reasons I didn’t have the words in front of me was because someone, who’ll remain nameless, took my copy of the Scottish Liturgy 1982 service book off the lectern at the end of their sermon!

These things happen. The last time my mind went blank during a service I ended up singing four verses of a three verse Gloria! And before that I forgot the Lord’s Prayer — how can you forget the Lord’s Prayer?!

But apart from these there was a real sense of prayer and worship. It felt like a special event. And the congregational meeting afterwards went well too. There was an audible sigh of relief when people learned that the church wouldn’t close, and some appeared surprised to learn that I would be leaving the team in the next six months or so. When I locked up yesterday morning after the service and the meeting there was a buzz of excitement and hope.

It feels good that everything is out in the open: about the immediate future of the congregation, and of the team’s continued commitment to St Salvador’s, and about my future. We can never really know what is up ahead in our lives, and in the lives of our congregations. It’s good to be reminded every now and then, that no matter what happens “do not be afraid, God is with you”.