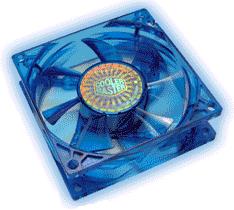 While I received an email last night from Dabs.com to say that my new graphics card had been dispatched and was safely in the hands of Parcel Force, ready to be delivered today … it didn’t arrive.

Not having the PC on 24-2 (since yesterday!) has meant that I’ve been able to tidy the house, clean the living room carpet, and go out for lunch with friends Craig and Jess. In other words: have a bit of a life!

But enough of that nonsense, back to important things. I bought a couple of 80 x 80 x 20 mm Coolermaster UV silent system fans today and fitted them to the inside of my PC case. I reckoned that if I’m going to be running more powerful components (graphics card and soundcard) then that means they are going to be running faster, meaning more heat. As it was I had only one external fan and that was already had the power supply to contend with. So I’ve added one fan at the front to suck air into the system, and one at the back to expel air from the system. While I was at it I also spaced the hard drives out a little more, as I was surprised at just how hot they were when I opened up my PC the other day.

Hopefully I’ll now have a much cooler PC. In every sense of the word.