I’ve decided! Enough is enough. I’ve run my blog under WordPress 1.2 for long enough. I need to upgrade to the latest version, WordPress 1.5.2. And the sooner the better.

One reason is that I’m currently deleting over 200 spam comments a day, and that’s even with Spam Karma 1 installed, and a couple of other anti-spam tweaks. The new version is so much better, more secure, more adaptable, and Spam Karma 2 is only available for it! Besides I’m already using it effectively on a number of websites with no trouble, and I really like it.

The only problem is that my blog is currently integrated into the current design of my website, which I also want to upgrade in the next couple of months (and that is quite a big job ahead of me!). I also have to work out how to keep my https://www.garethjmsaunders.co.uk address for the blog. I suspect it will have something to do with some .htaccess tweaking (that’s a file on the web server that automatically handles redirects). So, it may be that the blog has the default WordPress theme for a couple of months while I explore possibilities and build a new site.

But the blog will move to WordPress 1.5.2 some time this week. If it all goes down for a couple of hours, that’s why. But I can assure you of one thing: I’m backing up everything first — MySQL database, server files, WordPress installation … everything!

On Friday Jane surprised me by coming home for lunch, en route for a meeting in Perth. I’d just received news of my job interview and Jane wanted to give me a hug. But we had nothing in the house so took a wee trip along the road to the Scotmid (Co-op). Jane bought some healthy soup, and I got this, Co-op Cottage Pie for the reduced price of 69p. 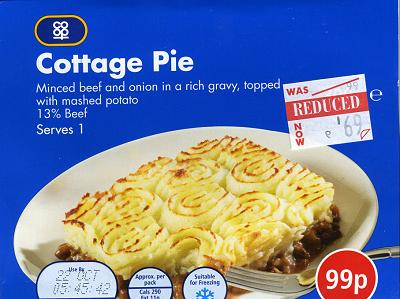 FISH?! It was Jane who noticed it on the back of the packet under “Allergy advice” it says: 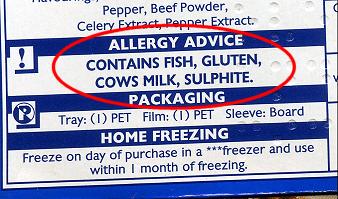 I don’t even know what sulphite is, but I sure know that whenever my Mum made Cottage Pie it didn’t contain fish. But sure enough, reading through the ingredients I see that this cottage pie is made with anchovies. So I guess vegetarians could eat it then. So long as they pick out the 13% beef.

My good friend David Meldrum complained about my last-but-one post about my PC problems. He wrote in a comment:

In future, can you also post an alternative entry on topics like this in a â€˜for dummiesâ€™ style? I undersood nothing thereâ€¦ I want to join you on the rollercoaster of emotions that is your life with your computer, but feel unable to do so just now, due to being a bit thick.

Ok. Basically what happened was that my computer was reporting that my processor (CPU) was running at the wrong speed. That’s a bit like buying a Ferarri and discovering that it has the top speed of a Reliant Robin!

I tweaked a couple of settings ‘under the bonnet’. At one point the computer didn’t start at all. I got worried.

After much geeky faffing about I discovered that the problem was that the CPU was overheating due to a dusty heatsink and fan (the bits that try to keep the processor cool). A bit like when a car engine overheats the car doesn’t run quite so smoothly.

I cleaned the fan. That fixed the problem. I was happy.

Last Friday (14 October) I went for a job interview at Heriot-Watt University. Yesterday morning I received a letter thanking me for attending, saying that the standard of applicants was high, but that I hadn’t got the job.

The job was for the post of Web Editor, initially a task of dealing with the backlog of site updates, but potentially moving into more in-depth PHP/MySQL database backend coding. I knew that my editing skills and my XHTML/CSS knowledge was certainly up to the task, but I felt that it would come down to how much they needed someone with solid database skills.

Since first meeting with the bishop a couple of months ago to explore my future beyond April 2006 — which is when my current appointment ends — I’ve been trying to think widely about what to do next. As far as full-time ministry is concerned, as I think I’ve blogged before, I don’t really want to ‘run’ a parish. Being a priest doesn’t have to equal being a rector or priest-in-charge.

I’m also a little uncomfortable with the idea of one person ‘running’ a church congregation; it can potentially lead to a temptation of feeling a little self-important. Which is a naturally human response: wanting to feel significant and important. But it’s not what priesthood is about for me. Priesthood is a bit more subversive, working in the background, encouraging others, building them up so that they can exercise their ministries and gifts. And I feel that ‘running’ a congregation would get in the way for me to do that effectively. That’s one thing that I’ve enjoyed about working in this team at St Salvador’s and the Church of the Good Shepherd: the admin side of the job has been shared between the congregation and the team.

Stipendiary (full-time paid) ministry is about giving the minister enough money to live (a stipend) which releases them from having to find paid employment work to support themselves and their family so that they can exercise their ministry more fully. Ironically, I’m now at a point where I suspect that I need to go out into the ‘secular world’ (another phrase I don’t like) to find employment so that I can exercise my ministry more fully.

But then maybe I’m reflecting something of where the Church is too. My future is uncertain right now; the future of the church is also unclear. And I suspect that the path the Christian Church also needs to take is outwards, towards the general population. We need to leave our quickly-emptying safe houses and get back into the community, whichever way that we can. During the last couple of years, the best conversations I’ve had, the deepest, most spiritual conversations I’ve had are with friends (mostly Joinees) in the pub. Or while sitting with people in hospital. Significantly, not in church buildings.

I’m left today with the disappointment of not getting the HW job, but encouraged that I got an interview at one of Scotland’s best scientific universities. That has to say something positive about my having the skills to compete in that market. I’m also disappointed that I currently can’t see a way forward to exercise my skills and ministries within the Church in a full-time capacity, and also that the Church currently doesn’t see reaching out in new, dynamic and simple ways to the general population as a number one priority. And again I find myself finding comfort in the story of Abraham called out from his comfortable life in Ur to be lead by God into the unknown.

I don’t know what’s ahead. At times it terrifies me, to step out into the unknown, to return to employment outwith the Church. But it’s also terribly exciting. All I want to do is to follow God, be obedient to God, and to use my gifts in a way that helps others and also fulfills me in a creative way.