I just about to install Battlefield 2 to my PC this afternoon when I was intrigued by the “EAsy Info” option on the Autorun installation menu. I clicked it and discovered that it was the “Electronic Arts System Information Utility”, an application that quizes your system to see if it meets the minimum specs required by the game. 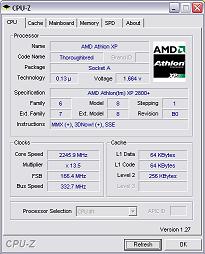 Imagine my surprise then when EAsy Info reported that my CPU speed was a paltry 1.35 GHz. I couldn’t believe it. There must be some kind of mistake. I pulled up Windows XP System Properties (Windows key+Pause/Break). It too was reporting that I had a 1.35 GHz CPU installed. So I reached for the excellent CPU-Z application (right) which informed me that not only was my CPU running at 1.35 GHz, but my front-side bus (FSB) was a mere 100 MHz.

The AMD Athlon XP 2800+ was one of the first Athlons to support a 333 MHz front-side bus — really just a 166 MHz with some fancy double-data rate technology — which means that on my system it should be running at 166 MHz (since 2 x 166 = 332). Having verified this online and in my motherboard manual I restarted my PC and entered the BIOS setup, changed the FSB to 200 MHz (quite by accident) and restarted … only it didn’t.

I had a dead system. It wouldn’t start. I panicked for a little while. Switched off … on … nothing … off again … on again … again nothing. Panicking and switching my PC off and on wasn’t doing me or it any good, so I reached again for my motherboard manual.

It turns out that it’s quite a common problem, overclocking systems to the point that they don’t start again. The fine people at MSI provided a couple of jumpers that when I changed them about (following carefully the instructions in the manual) my system started again. Hoorah for me! Hoorah for MSI!

I restored the default BIOS settings, switched off, reset the jumper to allow the motherboard to support 133/166 MHz FSB and returned to the BIOS. I got my PC to start up again … at 133 MHz FSB, but not at 166 MHz. At 133 MHz it reported that I had an AMD Athlon 2200+ running at a mere 1.8 GHz (since the Athlon 2800+ CPU multiplier is 13.5 and clock speed equals multiplier times FSB, so 133 x 13.5 = 1795.5 MHz). So at least the CPU was working fine at a slower speed. It did cross my mind that my dear old Athlon might have died a little and turned itself into a Duron! But that fear was dispelled when I managed to get as far as seeing my Windows XP desktop with the FSB set to 166 MHz before the system froze.

Do you know what the problem was? My CPU heatsink!

In the BIOS I have a PC Health panel that was reporting that my CPU temperature was over 65°C. I dismantled my CPU heatsink and fan and hoovered it out — it was caked thick with dust — and applied some new thermal paste that I had in my PC toolbox (it’s always an essential to have on hand) to the underside of the heatsink and reassembled everything.

Back to the BIOS went I, selected an FSB speed of 166 MHz and … it worked! My BIOS is now reporting that I have an AMD Athlon XP 2800+, as is Windows XP and CPU-Z. I returned to the BIOS to adjust a couple of other settings, and noted that my CPU temp had now dropped to a more respectable 45°C. It just goes to show how important cooling is within a PC. I have space in my PC case for another cooling fan, besides the power supply one. I may just go and buy one.

Update: I discovered from this website that the critical temp of an AMD Athlon XP 2800+ is around 90°C, so 65°C wasn’t all that hot for my system. Still, cleaning the fan fixed the problem.