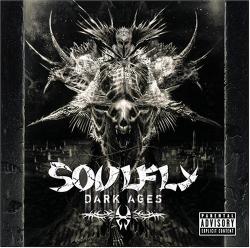 The new Soulfly album, Dark Ages, was released today. This is their fifth album release since vocalist/guitarist Max Cavalera split from Brazillian thrashers Sepultura in 1997.

Cavalera seems to have rediscovered his roots in thrash with this album, it is dark, brutal and unrelenting in its delivery of quality thrash metal. And yet at the same time it is in places both delicate and beautiful.

Which doesn’t really surprise me because, believe it or not, Cavalera is a Christian. There is an honesty about life, a lived-out hope in despite of the darkness of many aspects of modern life, and a deep spirituality evident in both Soulfly’s lyrics and music. One of my favourite songs for theirs, both lyrically and musically is from Primitive (2000):

Conquer this fear spiritually
Forever let it be
Into infinity

I feel your presence every day
It’s so real in every way
Give God thanks and praise!

There are so many metal and rock bands and artists these days ‘coming out’ as Christians, or who are, at least, expressing their spirituality in their music and lyrics, it is quite an exciting time to be involved in both faith and music.

Weekly rock magazine Kerrang! ran an article this week about “the astonishing rise of Christian metal”. I quote:

There was a time when invoking The Lord at Donington [a major annual rock festival at Castle Donington] would have resulted in a hail of abuse and piss bombs. But in today’s metal scene, Christianity is everywhere … Dave Mustaine of Megadeth claims the inspiration for his latest album came from The Bible. Meanwhile, newer bands like Norma Jean and As I Lay Dying are winning over metal scenesters as well as devout church-goers. Even Slayer’s Tom Araya recently spoke of his belief in an “all-loving God”.

Something strange and unexpected is happening. From the soaring, redemptive anthems of Killswitch Engage to the righteous savagery of Still Remains, it’s almost as if Christianity has become … cool.

Which seems to be reflective of the current spiritual climate and openness about spirituality, I think. I’ve spoken with a lot of people recently, of all ages, who have little involvement in the established church but who are nevertheless continuing to struggle with the question of their own spirituality, about how to live a life of faith, and who don’t perceive that these are questions that the Church is interested in.

It is almost as if rock stars have become our modern day prophets, pointing out injustices, pointing people to God. And unlike church leaders, unlike politicians, it doesn’t feel as though (most) rock artists have an agenda. It feels as though there is an honesty and integrity about what they are saying. And their faith, as conveyed through their lyrics and music, also feels natural. It feels to be a part of their everyday life, not something that is reserved for a particular day (Sunday) at a particular time (10:30am for an hour).

And that speaks to me, for one, a lived-out faith in all its complexity, in all its depth of emotion, within a life that at times feels dark, brutal and unrelenting, and yet at the same time it is in places both delicate and beautiful. And in the midst of this life, dear God, I feel your presence every day. It’s so real in every way. Give God thanks and praise!

When I returned from a meeting this afternoon and discovered that my new mobile phone still hadn’t been delivered, despite being told by the O2 customer service advisor that it would be in my hands on Friday, I rang O2 customer services again (dial 202 from an O2 handset).

I explained why I was telephoning and the advisor asked if I could hold for two minutes while she spoke with someone from the upgrade department. “Sure,” said I. And was immediately put on hold.

“Hello, Reverend Saunders?” said ‘Kelly’, in a Welsh accent. I’m sure she wasn’t putting it on, maybe I should have written “in her Welsh accent”. I’m not even sure now why I even mentioned she had a Welsh accent, except that it sounded nice and soothing. I like the Welsh accent; I like Welsh names, too! There is something gentle about the Welsh accent that puts me at ease. I’m sure if my renal consultant was Welsh I wouldn’t feel quite so bad about having an inherited kidney disease. “Hello Gareth — nice name, by the way!” she would say. “I’m sorry to tell you that you have a kidney disease. Who knows, you may live into your eighties, or it may take your life when you are but fifty years old, like your father, and his father before him.”
“Okay, thanks for telling me,” I would say.
“You’re not worried about that?”
“Well, obviously, it’s a concern. But you said it in such a gentle and reassuring way that it doesn’t sound all that bad.”

That’s how I imagine it would go. Instead, I get someone from an eastern block country that shouts at me. Anyway, my phone…

My new phone … wait for it (cos I have been!) … hadn’t been ordered. That’s right. The first O2 customer services advisor (CSA) told me that my phone would be with me by Friday, and then as soon as she hung up promptly failed to order my handset. Incredible!

Today’s CSA told me that a new one had been ordered (fa’ shizzle) and would be scheduled for “fast delivery”, so I should get it within 48 hours. There is usually a charge of £14.95, though I’m not sure whether she meant for delivery or for the handset, but said that as a goodwill gesture they would waive that fee.

So, I may have a new Nokia 5140i anytime between now and Wednesday.