Since getting back from cycling this afternoon, at 16:25, I’ve had the hiccups. That’s six hours!

Last night my brother Eddie and I gave a presentation at the Murrayfield Churches Together’s faith development group, Sundays at Seven, entitled “Where is God in modern music?”

I won’t go into what we said — you should have been there! Where were you? — but I simply want to say that we drew heavily on two books.

A Matrix of Meanings

One of the best books that we found while researching the topic was A Matrix of Meanings: Finding God in Pop Culture (Engaging Culture series) (Baker Academic, 2003) ISBN 080102417X by Craig Detweiler and Barry Taylor.

Detweiler and Taylor look at not only music but television, advertising, film and other major mainstays of modern culture. They argue that while a lot of other commentators berate modern culture as being Godless that is not their purpose in this book. Instead they’d like to find a healthy, Christian attitude to contemporary culture; to find whatâ€™s right with pop culture. They’d like to see people open to the possibility of listening beyond the image (going deeper), listening to what is actually being said: prophetic messages of justice, the environment and poverty; songs of hope, abandonment and displacement, the sort of things we would expect to find in the book of Psalms, for example. It’s challenging and eye- and heart- and spirit-opening stuff.

In terms of our presentation, we used Microsoft PowerPoint, and followed the advice given in this excellent book: Beyond Bullet Points: Using Microsoft Powerpoint to Create Presentations That Inform, Motivate and Inspire (Microsoft Press, 2005) ISBN 0735620520 by Cliff Atkinson.

Atkinson’s approach to PowerPoint presentations, you’ll have guessed from the title, is to sweep away those boring bullet points and to draw on the success of modern television and Hollywood: tell a story. As he says:

The basics of good storytelling have been an open secret since Aristotle described them 2,400 years ago, and today you can tap into the power of these classical ideas by applying a story structure to your PowerPoint presentations.

Well last night we did, and it seems to work very well. It gave our presentation a very clear structure that I’m sure helped the audience as much as it helped us while delivering it. (There are some very good articles to download from Cliff Atkinson’s Sociable Media website. Highly recommended.)

As well as the visuals presentation we also played snippets of music (some songs downloaded from the excellent Apple iTunes store). Eddie chose some songs: Mylo, Robbie Williams, Mary Mary, Switchfoot. I chose others: Rage Against The Machine, MotÃ¶rhead, Slayer and Soulfly. As Eddie said, “I’m sure that was the first time that some people there had ever heard Soulfly!” I dare say it was, and probably the last, too! 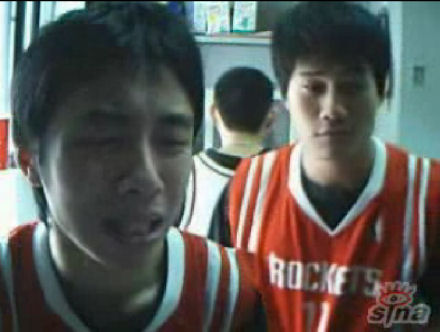 My friend James pointed this one out to me. Not only does Google now have Google Video in beta, but it’s also packed with some gems.

Take this video, for example, of two Chinese young men miming along to the Back Street Boys’ song “I want it that way”.

I love the guy on the computer behind who seems oblivious to their pop video antics. I mean, I don’t actually love him, you understand. I’ve no idea who he is. I love Jane!

(Note: you may need broadband to view this video.)

Having booked my bike into the Edinburgh Bicycle Co-operative I expected to have to leave it there to have my gears set up and return to collect it tomorrow; that’s what I normally have to do. Instead they fixed it there and then, and all for nothing, it being the first service after they fitted a new freewheel cassette a few months back.

I have to say — and I said this to the chap in the workshop — every time I’ve been to the EBC their service, enthusiasm and help have been fantastic. They are clearly all bike enthusiasts who are only too happy to help people of all abilities. No question is too stupid, they really are there to help. I thoroughly recommend them.

So, this afternoon I went out on my bike, to test out my new Cateye Velo 8 trip computer. I cycled only 0.9 miles when I got a puncture: a dirty great thorn sticking into my front tyre. Thankfully, I always carry my bike toolkit (in an unused toiletries bag) and two spare inner-tubes, so I pulled over and replaced my front inner-tube: 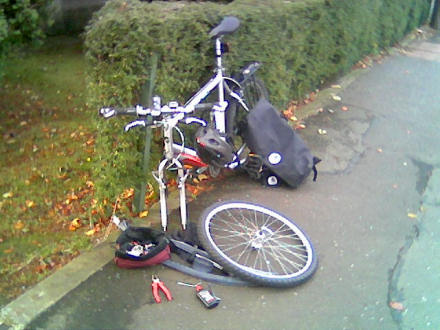 … and took off again. Here’s the data from my trip computer:

(* The calorie consumption data is only the accumulated value that is calculated from the speed data of every second. It differs from the actual consumed calorie.)

I’m determined to get fit again. I’ve put on far too much weight over the summer, mostly due to both comfort eating (as I’ve not dealt with various bits of news very well), and lack of exercise (not helped by my pulling muscles in my back in July). The trip computer I’m hoping will be a good motivational tool, helping me to chart my progress using the magic of numbers.

Now, can anybody tell me what a calorie is (without looking it up)? I know, but do you?

Not quite sure where to start this evening, to be honest; my mind is a whirlwind of images and words and thoughts and ideas and sounds. The lack of sleep hasn’t helped either … and tonight the clocks go back one hour, so while my PC clock says 00:37, the clock on my desk says 11:37.

Following what should have been a long lie (getting up at 10:00) but was after only 5.5 hours sleep, I was back at my desk working on my sermon for tomorrow (this?) morning. I’m to preach about to what kind of church I would like to belong, as part of a sermon series. I ended up saving it to my Psion and taking it to Cellardyke this afternoon. Which was the next thing we did. Jane drove, I typed.

At one point I had too many ideas spinning around my head. Too many loose ends, too many possibilities. So I put down my pen, and the papers I’d brought to read through, sample chapters of Alban Institute books and notes from college days, and I listened to Jane. What kind of church would she like to belong to? I learned a lot; I should do that more often.

We tidied the house for friends Andrew and Lindsay Howie, and their baby, Peter, arriving at 16:30. We were only able to stay for a short while, but it was refreshing to get away, to see good friends, taste the sea air again, and hear it crashing on the rocks and into the harbour walls.

Back into the car… back through a very dark Fife … back across the Forth Road Bridge (they’re decorating the Forth (rail) Bridge just now with lights for Christmas. Back to my PC to write more of the presentation. Eddie came over later and we worked on the musical soundtrack for tomorrow evening’s Sunday at Seven meeting, “Where is God in modern music?”

I have more to work on that before I retire to bed. Then up again early to finish writing my sermon.