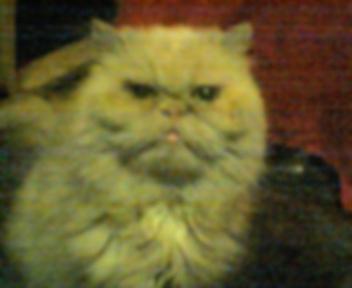 Lucy was originally my sister Jenni’s cat, a present for her 16th birthday. But when Jenni moved away to college in Carlisle and then to university in Manchester Mum agreed to look after Lucy, rather than Jenni taking the cat with her.

During her time with the family Lucy was bred twice. We sold all the kittens from the first litter, but kept one, Haggis, from the second, and later agreed to take back another, Pooky, as his owner couldn’t cope with a new baby and the cat at the same time. Sadly Haggis died a few years ago, probably as a result of someone kicking him, the vet said.

Lucy was definitely the boss cat of the neighbourhood. She didn’t stand for anything, from cats or dogs. And yet she also had the kindest nature. We called her the “nurse cat” as she would sit with you if you were ill in bed until you were well again.

Latterly, Lucy was a great companion to Mum, cuddling up with her in bed at night until her kidney disease robbed her of her eyesight and she became too poorly. (Although that didn’t stop her going out through the cat flap a couple of nights ago into the pouring rain, and courageously finding her way back in and to the furry cat’s ‘nest’ next to the fire. She might have been blind but she wasn’t daft!)

Mum didn’t get any sleep on Wednesday night as she sat up holding Lucy in her arms, giving her some water every now and then, and simply being with her until she died in the morning.

I was planning on visiting Selkirk anyway yesterday (Thursday) and found out about Lucy’s death from a text message that Mum sent me: Will you have time to dig Lucy's grave when you come? Subtle! … thanks Mum!

I dug her grave, next to Zen’s (our first Staffordshire Bull Terrier). There was something right about digging the grave. It was the same ‘rightness’ that I felt when Dad died at home, rather than being whisked off to the clinical, remoteness of a hospital. Death was there in the midst of life — not hidden away, not something to be embarrassed about. Dad’s cold, lifeless body lay in the back bedroom for a few days while we prepared ourselves (and him) for his funeral. It felt right that Dad died at home with us.

When I arrived home Lucy was also lying in that same back bedroom, in the basket where she had been placed after dying. While her son, Pooky, was keeping watch, sitting in the basket that we’d planned to bury her in! It felt right that we dug the grave for Lucy, rather than allowing the vet to take her body to be disposed of. It felt right that we were on our hands and knees scraping at the dirt with forks and shovels and lifting out the dirt with a plastic basin.

These things felt right because they mattered to us, Dad and Lucy. There is something to be said for these ‘old ways’: when people died in their homes, and the men folks of the family (or village) dug the grave. Sometimes these days we separate death from life too much. And sometimes we don’t even live!

We all joined in to cover the small wicker basket with soil, as we said our goodbyes to Lucy and the tears fell from our eyes. Bless you little Lucy, thank you for your love and purrs and cuddles. 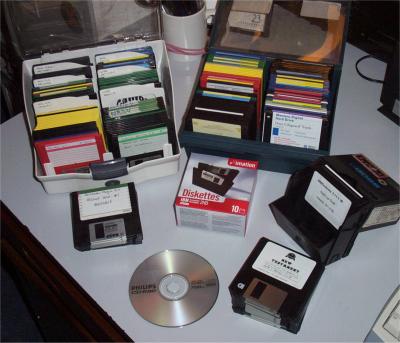 Do you remember what these are called? Ah, the good old days when you had to install operating systems from floppy disk. For MS-DOS 6.2 it took 3 disks, Windows 3.1 used 6, Windows for Workgroups 3.11 occupied 8 plus one for mouse drivers, while — can you believe? — Windows 95 was shipped on 24 floppies! 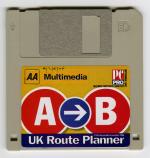 And PC magazines were sold with 3.5″ disks sellotaped to the front covers. This was the AA‘s A to B UK Route Planner application that was shipped with the September 1997 issue of PC Pro. Not only was it a great application (it showed no maps, it just described where you should go!) but I loved the fact that it said “Requires Microsoft Windows” on the label. A warning to all those late-90s die-hard DOS fans that maybe it was time to upgrade after all! (I moved from my job in London in 1997, where one of the offices was still running a Novell Netware DOS network … ah, what fond memories of the complexities of WordPerfect 5 for DOS!)

Anyhow, as part of my PC restoration process, this evening I sorted out my collection of 3.5″ floppy disks. I discovered that (astonishingly) I have 208 of them, including 5 DSDD 135TPI disks for the Apple Mac SE (which were state of the art when I was at university!).

Most of the disks have now been backed up to hard disk (once again!) and again onto CD-ROM. I must only have transferred about 100 of the disks to CD as it took up only 146MB. That’s not even 1/4 of the space available on a CD-R, and it’s about 1/32 of a DVD! How things have changed.