After putting it through the carwash one last time, and hoovering out the footwells (which were minging!) just in case Steve’s sole reason for buying it was to clone Jane and I from biological material left on the seats or floor — don’t make that face! I’ve watched Silent Witness on the telly! — we exchanged papers and handed over the keys.

Here’s a photo of the proud, new owner: 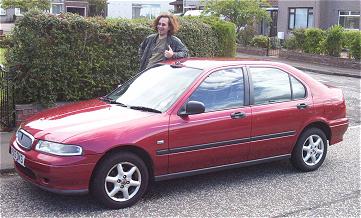 I’m so pleased the car has gone to someone who will abuse its suspension endlessly with the amount of PA gear he has to cart around with him to gigs … and he’ll still have room for his girlfriend’s legs.

So, we’re now back down to one car, which will save us so much money especially since petrol is at mental prices just now. On Sunday I filled up in Galashiels, unleaded was 101.9p per litre at the first petrol station I passed, and 99.9p at the one I stopped at! £1.01 is $1.87 USD. If petrol (gas!) prices were like that in the States there would be riots!

It’s also more environmentally friendly, and will force us to be more organised. We’ve got to the point, because we’re both so busy, that we’re now scheduling in weekly business meetings with one another just to manage everyday life, finances, the Cellardyke house, etc. How romantic! Anyway, I don’t mind, so long as it works. Why does modern life have to be so complicated?

Still, it’s a little less complicated now we’ve one fewer car to worry about. Many happy miles driving, Steve! Remember that it uses unleaded petrol not diesel. Oh! … and did I tell you that that model of Rover uses a disposable exhaust that you need to change every 6 weeks?