Last night Eddie and I went to Steve Lawson’s gig in town. (You can read Steve’s opinion of last night on his blog.)

I’d never seen Steve play before — other than twiddling on my acoustic guitars here at Potting Shed HQ (Festival Accommodation Dept.) — so it was a real treat to not only see and hear him for the first time last night, but also be his roadie and help him set up and strip down his live rig. I was standing in the foyer before the gig waiting patiently with about 30+ other people, whom we were all hoping were also there to see Steve (they were … and more!), when all of a sudden, like the Shopkeeper from Mr Benn Steve suddenly appeared, snatched the ticket out of my hand, handed it to a pretty girl who looked at it, blinked and said “THANKS!!”, and told me to “Follow me”. I followed him. Steve, it seems, had promised a complimentary ticket to this girl, but had forgotten. So she got my comp and I got in as his roadie/tech support.

Having pulled off the covers from his speakers, and helped save one of the C Central staff from a sugar overdose by relieving her of her last three Moon Pies (?!) — which I then left on a couple of seats in the middle of the front row thinking that somehow that might indicate to punters that those seats were taken. But alas! It appears that Moon Pies do not hold the same seat-saving properties as towels, items of clothing, “This seat is reserved” signs, and tigers. Not at the Fringe, anyway. Not at this gig at the Fringe, at least.

Steve’s hour-long (or thereabouts!) gig takes the form of beautiful, looped instrumentals interspersed with random, but very, very funny chat. There were a couple of moments when I was crying with laughter, particularly during the monologue when Steve abruptly stopped playing to explain just how he was playing all this live. Seemingly it’s all done with chinchillas. But they do get paid Union rates and have adequate breaks, so please don’t be alarmed.

One of the attractions of attending last night’s gig was that ex-Pink Floyd bassist Guy Pratt would be guesting. But to be honest, I was a little disappointed (when he eventually turned up about 20 mins late!). Steve had told me before hand that Guy would be playing along to one of Steve’s songs — I guess having another live bassist saves on at least one bass loop. But instead, Mr Pratt launched into his own relentless back-catalogue of funky 80s-inspired basslines.

What followed is a little hard to describe. At times there were moments of musical genius. At other times it simply looked like one bass genius trying to salvage his Fringe show from the hands of another (pissed and more famous) bass genius! And then he left, just as quickly as he had appeared — Guy Pratt has left the building! — Steve looked a little confused, and looking around the room asked, “Did someone just come in?”

Back to the main attraction. Back to a mellowed out and very beautiful solo bass track written for friend and guitarist Eric Roche.

I could have sat and listened to Steve’s combination of funny chat (hecklers welcome!) and beautiful, layered music for hours; 60 minutes was just not long enough (particularly when a quarter of it was hijacked by another rock star!). Steve isn’t your stereotypical bassist: a flurry of clichÃ©d chops worthy of the demo booth at your local guitar store. Steve’s music is complex and intelligent, layered and melodically beautiful. It just so happens that he plays it on a bass guitar.

A couple of months ago I stumbled across the website of a Manowar-wannabe band TerÃ¤sbetoni. 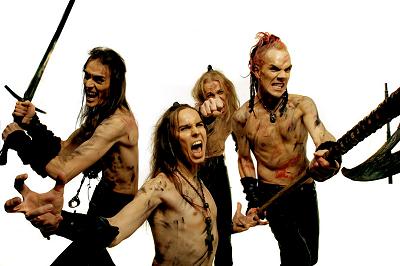 To compare them to Manowar is unfair, to be honest. Manowar are four warriors of Real Metal™, the true kings of the Kingdom of Steel. TerÃ¤sbetoni (I can’t even remember their name let alone pronounce it!) on the other hand are how Manowar might look if they were crossed with Orcs and left to fend for themselves in a prisoner of war camp for 12 months! (See photograph above.)

Their biography in English (the rest of the site is Finnish) is truly wonderful. It begins:

“Combining two of the worldâ€™s toughest elements that combust in heat in relatively the same manner results in a combination that is virtually impossible to break. Very similar to the mindset of a soldier!”

But my favourite quotation is taken from their first single called “Taivas lyÃ¶ tulta”, which, believe it or not, sat at No.1 in the Finnish charts for three weeks!

“The call of metal may be too hard to handle for some, but not for those that are guided by the warrior instinct”