My friend Ruth has found a new online quiz, called “What’s your theological worldview?”. I wrote a paper at college about how our worldview affects the way we ‘do’ church.

Here’s how I scored, quite predictably, really:

You scored as Emergent/Postmodern. You are Emergent/Postmodern in your theology. You feel alienated from older forms of church, you don’t think they connect to modern culture very well. No one knows the whole truth about God, and we have much to learn from each other, and so learning takes place in dialogue. Evangelism should take place in relationships rather than through crusades and altar-calls. People are interested in spirituality and want to ask questions, so the church should help them to do this.

Haha! Ruth was upset that she scored 7% for Fundamentalist; look I scored 0%!

I was in our local Scotmid (Co-op) the other day, I walked in just behind a man in his late-20s or early-30s and his young daughter. While he stopped to look at the tabloids his daughter ran on into the store and began to explore. She sat on a kick stool beside the jams; I was looking for marmalade.

She took a jar from the shelf and looked at it. She was too young to read, and obviously didn’t recognise its contents. “What is this?” she asked as she looked up at me.

She still looked confused. “What’s honey?” she asked me.

At that moment, her father appeared and looked a little concerned that her daughter was speaking to a stranger. He took her hand, as she put the honey back on the shelf and led her to another aisle.

I felt sad that this little girl didn’t know what honey was. For the rest of my (five minute) stay in that shop I wanted to tell her what honey was, and where it comes from. I saw them weaving their way through the aisles, picking up bits and pieces that they needed. I stood in the aisle just in front of them, and wanted to turn around and say, “honey comes from bees!” But I was too late.

My word, my feet hurt! I’m not sure about whether last night was part of The Long Walk to Justice but it was certainly part of The Long STAND to Justice. But, you know, if our being there and adding our voices and presence to that of millions of others does persuade the G8 leaders to write off the debt of world’s poorest people then I’m happy to hurt! But enough of my moans, what of the evening?

Last night was my debut visit to Murrayfield, but what better way to be introduced to Murrayfield than with a free ticket, standing on the pitch in front of the north stand, and Scotland didn’t lose! 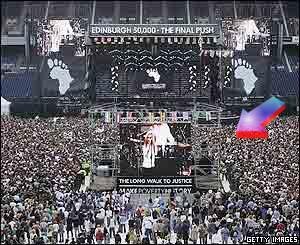 The arrow shows roughly where Jane and I were standing at Live 8 last night at Murrayfield Stadium, Edinburgh. (Photo: BBC News; arrow by me)

We parked ourselves as close to the stage as we could manage (see the photo above), standing in front of the stage ‘pier’ and in clear view of the right-hand video screen and waited for 70 minutes for the concert to begin. My brother Eddie and his wife Rebecca had seats in the east stand. We kept in touch during the night via hand signals and mobile phone messages.

The concert began with a giant curtain dropping to the ground on the ‘pier’ stage, while (I guess) 50,000 balloons were released revealing Lenny Henry resplendent in an all-black, leather kilt outfit, with the most incredible, horned sporran I’ve ever seen. Fantastic!

During the first hour or so of the concert there were 2 or 3 Beatles songs sung, “All You Need Is Love” by Jamie Cullum and Natasha Bedingfield, and “With A Little Help From Your Friends” by Wet Wet Wet. I began to wonder if I’d not turned up to a Live 8 concert but a fundraising event for Michael Jackson (who owns the rights to the Beatles’ back-catalogue and presumably gets a royalty each time a song is performed)!

I did have some mischievous fun with the young people standing next to us.

And what can I say about James Brown? Or ‘Jim Broon’, as I prefer to call him? The Godfather of Soul. Not much, my feet were hurting, my shoulders were hurting, my legs were hurting. I was hurting. When he asked the crowd, “Do you feel good?” I had to be honest and say, “No, Mr Brown, I don’t.” But he wasn’t interested in my petty complaints, seemingly the rest of the crowd did feel good and he agreed with them, and sang them a little song all about it; it transpired that he had also previously anticipated that he would be feeling good at this moment. I can’t help but feel that the situation was a little contrived. 😉

We walked home: The Long Walk to Bed. It was a great evening, so much energy, so much passion, such an eager desire to end this needless world poverty. Let’s just keep praying for the G8 leaders. We wait for Friday.