This August we have a number of guests staying over during the Edinburgh International Festival and Edinburgh Fringe Festival, including friend Steve Lawson, and his girlfriend. (Maybe I shouldn’t be writing that, just in case there is an onslaught of journalists and fans at the door every morning, like that scene from Notting Hill.)

This afternoon, Jane and I reorganised our guest bedroom. That’s right, it’s now “Morose budget.” (That’s an anagram of ‘guest bedroom’ if you’re not quite as quick witted as James ‘Conundrum’ Frost, who understood that immediately.)

I can’t believe how much space we now have. And the room now looks like it has a purpose, rather than simply a depository for random pieces of furniture. Here, have a look: 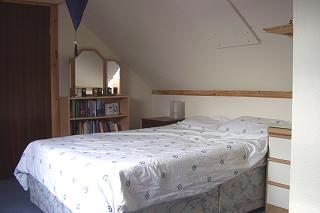 We’ve moved the double bed from behind the door, in a dark corner, to be the focus of the room. We still need to paint the wall behind it. 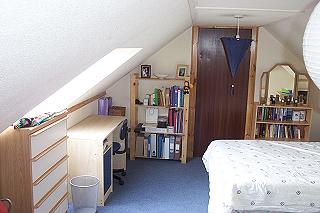 A light and roomy … er, room. Wall-hugging furniture all round! The door leads to the water tank, in case you were wondering. 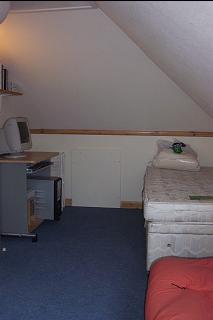 Count the beds. Single bed, and orange Ikea futon/sofa. And Jane’s PC. That’s the one I want to install Linux on to.

I hope that scary American lady from House Doctor isn’t reading this blog.