Sounds like a good start. For quite a while I’ve wanted to get into Linux (I already own the t-shirt!). Maybe this book will give me the chance to understand what it’s all about, how it compares with Windows, and what I need to do to get started. One of my immediate concerns is regarding dual-booting, that is installing more than one operating system on the same system, in my case Linux with Windows (either 98se or XP, depending on which machine I install it on here). This book, I am certain, will guide me through that process step by step: it does claim to be the Bible after all!

I expect to return from Cellardyke on Friday a fully-trained Linux guru.

Jane had her appointment at the Royal Infirmary of Edinburgh today, at the fertility clinic. It all went well, seemingly. Unfortunately, because I was being dosed up with antibiotics on the other side of town, I couldn’t be there, so the part of ‘Concerned Husband’ was this morning played by Mrs Dorothy Neilson, Jane’s mother and Enneagram Scotland business-partner.

After the usual clinic procedures of bloods, height and weight, Jane saw one of the fertility experts, a female doctor, whose name was, rather amusingly, Dr Rogers, who discussed her medical history (Jane’s medical history, that is, not her own) and what they knew about mine; the usual things: do I have any hereditary diseases (yes), am I on medication (no), have I ever had sex with a Russian prisoner (no), that sort of thing.

Then Jane was treated to some kind of internal scan to make sure her inside-ladies’-bits (as they are professionally known) looked as though they were working okay. And they were. Now, something I didn’t know is that women’s ovulation alternates month about between the left and right ovaries, like the pendulum of an amazing biological clock.

[Adopts Newcastle accent] Day 17 in the Big Brother womb and it looks like Egg has just left his room on the left-hand side of the house, and is making his way into the corridor to be greeted by …

Yeah, that’s another thing. Jane asked for clarification about my sperm test results from yay back (Thursday 27 January). Dr Rogers was far more helpful in her analysis of the test results.

It appears that we really have nothing to worry about on that front. The results showed that I have around 107 million sperm/ml, while the average is (according to Jane, according to Dr Rogers) around 30 million sperm/ml. Yay for me! Her only comment was that at times they were a little slow.

A little slow?! No wonder, have you seen how many there are?! Has she ever been on the London Tube at rush hour?! You turn up during the day, when there are an average number of people trying to get on the escalators down to the platforms and you’ve got plenty of room to move, plenty of opportunity to scoot on ahead, you can go as fast or as slow as you like. But as soon as you increase that number of people by a factor of, say three or a little more … you see what I’m saying?

The next step is a laparoscopy for Jane … in September. Seemingly, trying to co-ordinate theatre-time with consultants’ holiday diaries isn’t as easy as it might first appear.

But it all feels quite positive, we’re in the system, and the tests are (so far) coming back positive, in that there doesn’t appear to be any immediate and obvious reason why we’re not conceiving. You know, like “I’m sorry, but it appears that the reason you’re not conceiving is that Jane’s womb appears to be made from Lego!” or “I’m sorry but it appears that Gareth’s sperm is 50% lava!” We just keep trying …

I’m posting this from Firefox running under the Ubuntu Live Linux installation. Here’s a screenshot, which I’ll tidy up later. 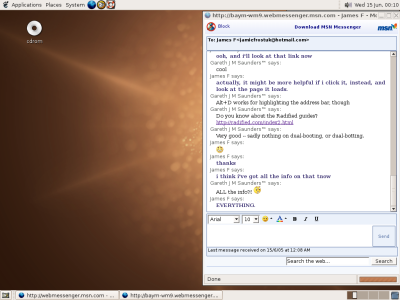