Today I’ve received, and deleted somewhere in the region of over 400 blog comment spam messages. I am so angry, and so upset that there are selfish, evil people out there who disrupt people’s websites. I sincerely wish that there was something that we could do to stop these people’s activities.

I’ll switch them on again soon, once this batch of comment spammers have moved on.

(In the meantime, I’ll need to work out a new anti-spam technique as I’ve just discovered that the plugin that temporarily disables comments also disables my posting of articles and logging into the site!! How rubbish is that?!)

Update: I’ve now added a new input to the comment form. You now have to type my name, and spell it correctly, in order for comments to be accepted. I’ll see how long that holds it at bay … probably not long, but I can only try.

Amazing what an overnight defrag does to your PC. My PC had gradually been slowing down, and it was getting more and more noticeable with frequently-used applications, such as Outlook and Firefox, taking longer and longer to start up. So, the night before last, I left my PC on overnight and ran a full system defragment using O&O Defrag (I have version 6). By the morning, I was quite astounded just how much faster my system is now running; it is positively flying along now.

O&O Defrag allows you to defragment the files on your hard drive using any one of five methods. I chose the “COMPLETE/Access method” which “defragments your files and reorganizes your file structure” and “guarantees maximum system performance when your files are being read.” I’ll let O&O Help tell you what that means:

Files are sorted according to when they were last accessed. The files that have been accessed the least will be placed at the beginning of the partition, and those that are accessed that most frequently are put near the end. Seldom-used files are defragmented and will not need to be moved in future. Frequently-used files are placed at the end of the volumes. This strategy means that future defragmentation runs are as quick as possible, as fewer files need to be checked and defragmented.

I was beginning to wonder whether I might need to reinstall Windows, but a defrag was all I needed.

Last night, I left the PC on overnight and downloaded the SUSE Linux 9.3 Professional LiveDVD ISO file, all 1.4 GB of it. This morning I burned the ISO to DVD and booted it up.

(For those who don’t know, an ISO file is an image of all the files on a CD or DVD, in a format that also contains the file structure, and any other information such as whether the disc is bootable. It’s a convenient way of allowing whole discs to be downloaded over a network in a single file, rather than making hundreds of files available with instructions saying ‘put x in this folder, y in that folder, z in another folder’. In order to convert it back to a bootable disc you have to use disc-burning software, such as Nero Burning ROM.)

Once again, I’m typing this from within a Linux ‘live’ distribution (‘live’ impling that the operating system has been booted from CD or DVD rather than installed to and booted from hard drive). This is now the third live Linux distro I’ve tried: Ubuntu 5.04, MEPIS and now SUSE 9.3 Professional.

I was impressed with how easily each of the distros installed, found hardware and automatically set themselves up. Operating systems have come a long way in less than ten years. I remember the relative hassle in setting up my old 386 with Windows for Workgroups: FDISK, FORMAT, install MS-DOS, run MEMMAKER, and a couple of other DOS tools, install Windows, edit the AUTOEXEC.BAT and CONFIG.SYS files by hand in order to setup multi-boot options, then install hardware drivers, then install software. I could spent a day or two doing this. When I graduated to Windows 98se I could easily spend up to four days doing a full system install. Today I popped the DVD in the computer, booted up and when I returned from the kitchen with a bowl of muesli to discover that my screen was green and SUSE was in the final throes of loading.

I’ve been impressed with SUSE Linux so far. One annoying thing, so far, that I’ve not been able to disable is that if I press Shift+Spacebar I get a keyboard language window pop up, and if I don’t notice it and press another key I can sometimes end up typing in Tamil or Korean script! And I press Shift+Spacebar a lot, as an uppercase space is still a space … or so you’d think. There must be a workaround, but I’ve not discovered it yet.

I’ve also discovered that my HP Laserjet 1000w only works with Windows! I can get my HP Deskjet 5150 to work fine under Ubuntu and SUSE, but not my Laserjet. Seemingly there’s a workaround that involves uploading new firmware to the printer … I think I’ll give that a miss, to be honest.

I’ve also not managed to work out how to get Linux to recognise both my monitors … at least, as separate monitors. At the moment I get the same display on both monitors, rather than the setup I have in Windows which is to extend my desktop across two monitors, so instead of 1280 x 1024 I have 2560 x 1024.

Still, if I do install one of these Linux distros it will be to the PC upstairs, on the network, and it will be to a separate hard drive and simply to set up a LAMP (Linux, Apache, MySQL and PHP) server, and I won’t have to worry about whether it prints or not.

This afternoon, I’ve been reading an issue of God’s Friends, a newsletter from Saint Gregory of Nyssa Episcopal Church in San Francisco (it’s available as a downloadable PDF file), and have been quite struck by the painting of Olivia Kuser, which is featured in the November 2004 issue.

There is a moving, almost haunting feel to some of her studio work. And both a darkness but also a hope. 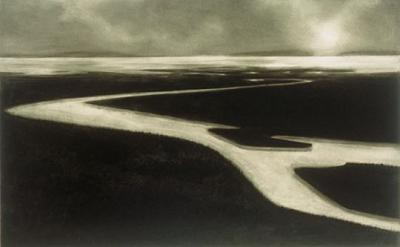 You can see more of her work at www.oliviakuser.com

Kelvin’s blog today has a link to the Which theologian are you? quiz. I’m JÃ¼rgen Moltmann, seemingly. This is how I scored:

You scored as JÃ¼rgen Moltmann. The problem of evil is central to your thought, and only a crucified God can show that God is not indifferent to human suffering. Christian discipleship means identifying with suffering but also anticipating the new creation of all things that God will bring about.