Jane and I were thinking that we’d have to buy a new TV for our living room. Every now and then (and more frequently than we’d like) the picture would suddenly cut out until one of us got up and waggled the SCART lead in one of the sockets at the back of the set. How annoying!

I got a catalogue from Maplin today and flicking through it got me thinking. Maybe I could fix it myself. If the SCART socket is broken perhaps I could desolder it and replace it with a new one; they only cost 85p at Maplin. I e-mailed my friend Robin who runs a TV repair shop in Inverness called Telly On The Blink. I don’t need a new socket, just resolder the one I have, he suggested. 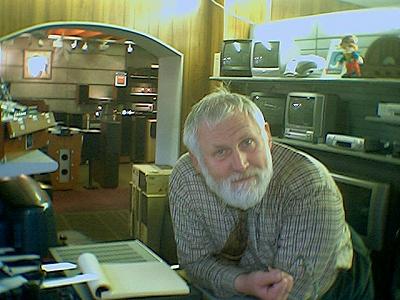 Robin on the Blink in his TV shop in Inverness.

So I did just that. (Dad had taught me to solder before I went to university — though I can’t remember why, but it’s a skill that has come in very handy more than once.) And, do you know … it worked! I had nothing to lose, we’d have to spend over £100 for a new TV anyway, but in this throwaway consumer society it was nice to be able to fix something rather than just bin it for a newer model.

Robin also managed to identify why people’s faces sometimes go green on the screen: the TV is too close to a magnetic source; in our case, one of the speakers from Jane’s hi-fi. It’s been a good and productive day today. Thanks Robin, you’re my hero of the day!